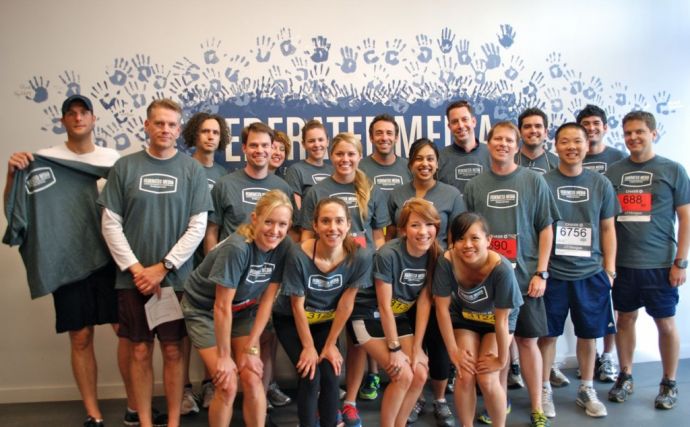 I work at Federated Media headquartered here in San Francisco. We represent the best independent websites on the Internet and sell advertising programs on their behalf. It's a fun, challenging, and growing company. I work with talented people.

For several years, FM has participated in the JPM Chase Corporate Challenge, a race where companies sign up and their employees form teams. The money raised from the race goes to a local beneficiary. We continued the tradition this year; You're looking at Team FM above just before race time. 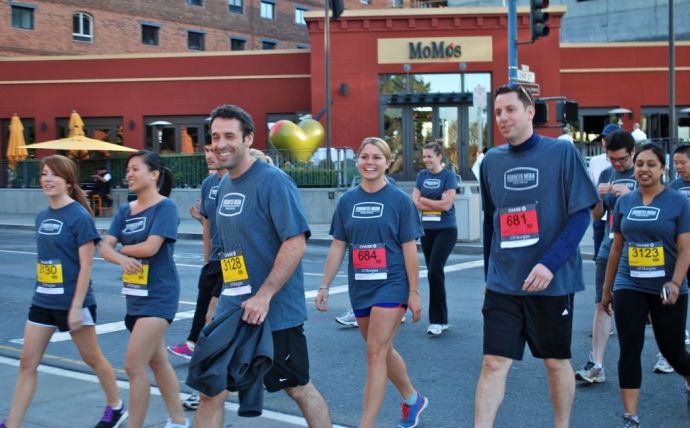 The race was a 3.5 mile race and was held just south of AT&T Park, where the Giants play. Since our office is right near the ballpark, it made commuting to the start easy. Here's our team on the group walk to the race, led by Sam and Jason. 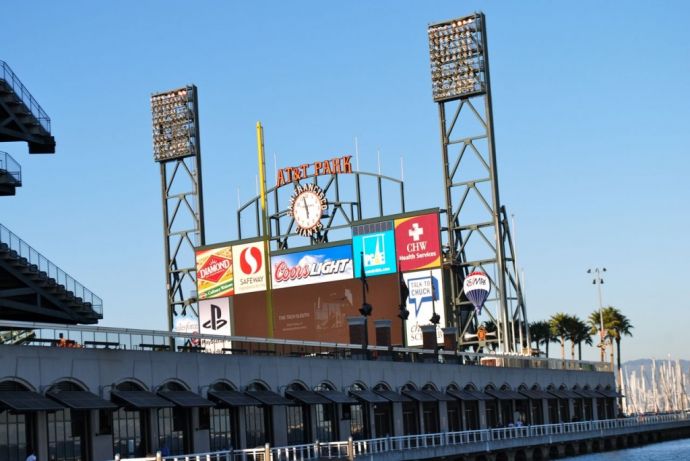 The Giants were away that night so we passed an empty ballpark. It was a beautiful night. 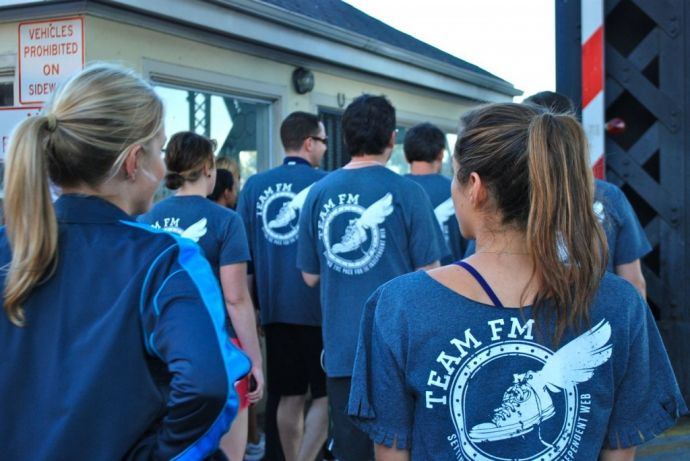 Here's the team walking over the Lefty O'Doul Bridge. If you're old enough to remember the James Bond movie, A View To a Kill, this is the bridge used during one of the most dramatic scenes in the movie. We just had to walk over it, unlike Bond. 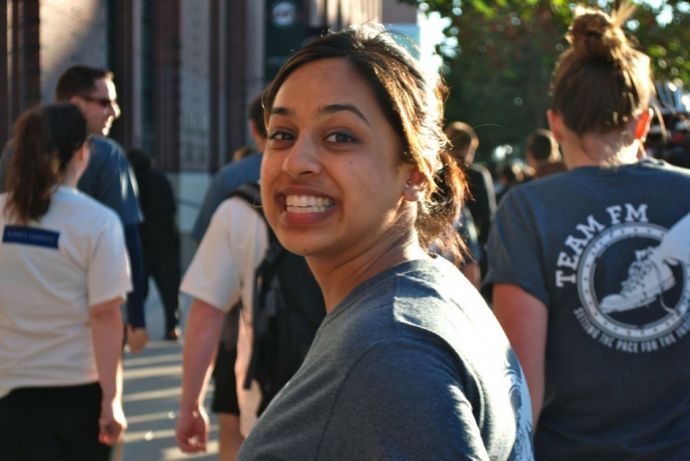 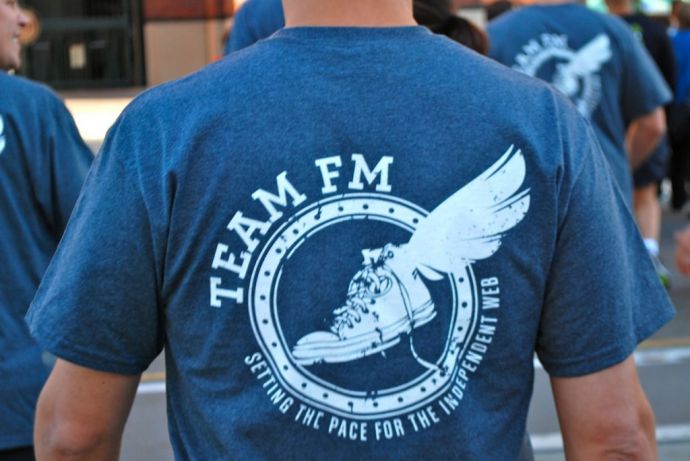 Here's the back. I gave her about four minutes to come up with something and she pulled through like a champ. They're great, Konina. Thanks. 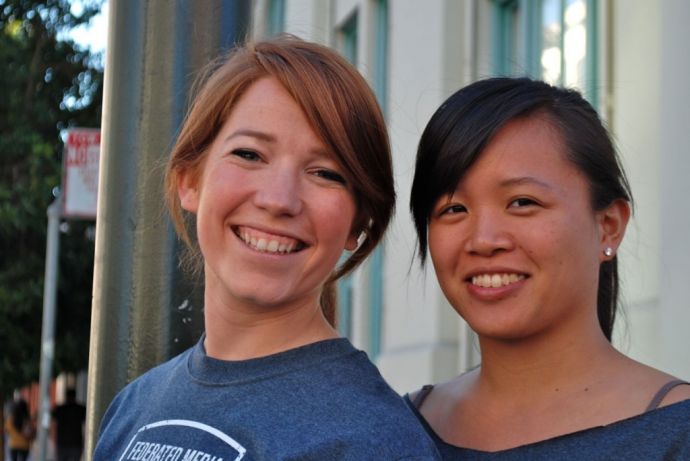 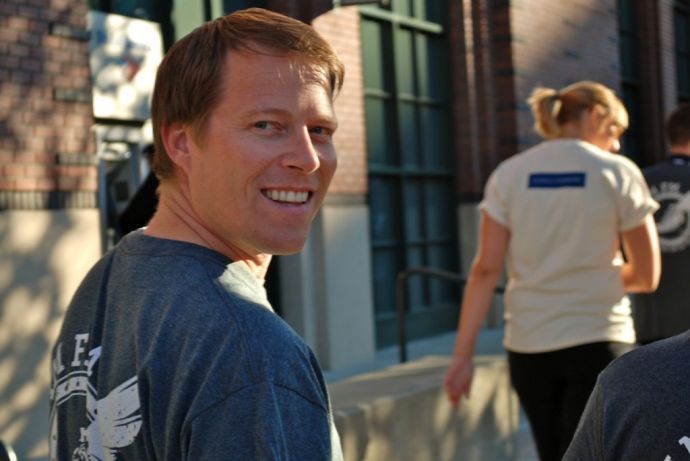 As we walked closer to the race, we started to mix in with other teams. Here's Chris Newman. 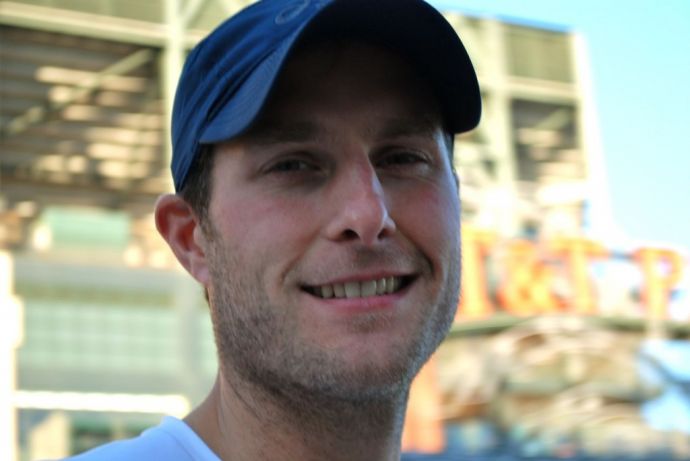 That's Matt. He has some height on him so I had to zoom in. 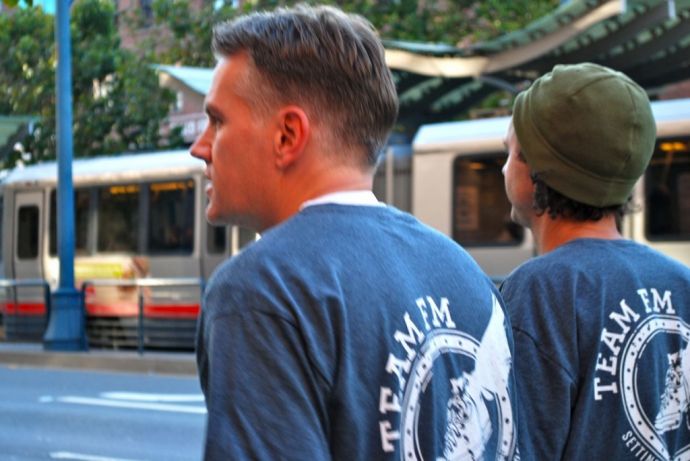 James and Robin were walking so fast, the best I could do was get this blurry back view. 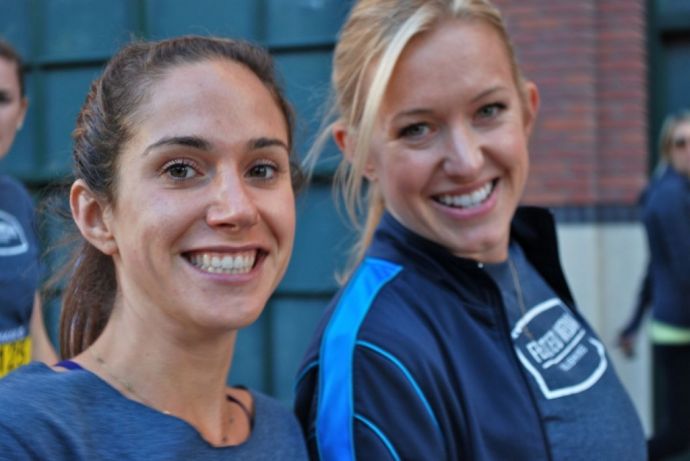 Karleen and Flora were getting amped for the race. Don't be deceived by their smiles. These gals are fast. 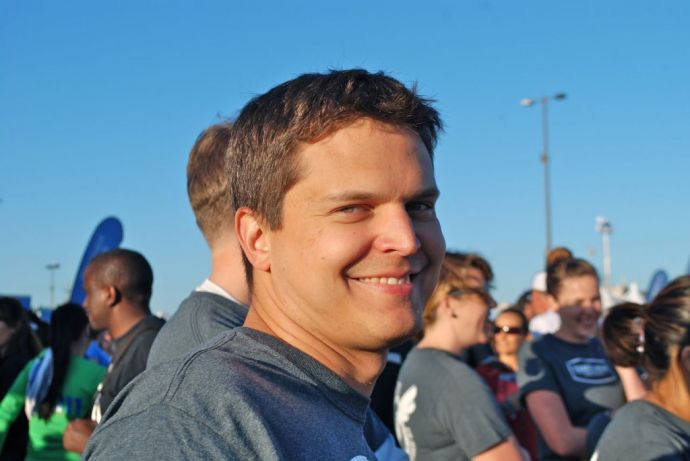 Brian was catching some of the last bit of the evening's sun. 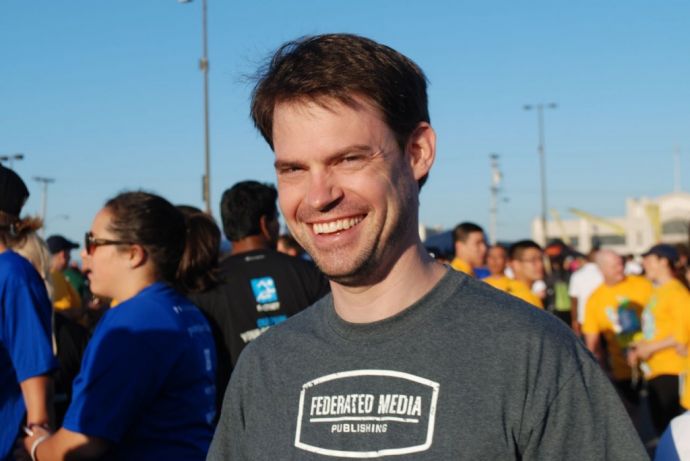 Here's Keith displaying the front of the t-shirts. You can see we were in the midst of quite a gathering crowd of runners. 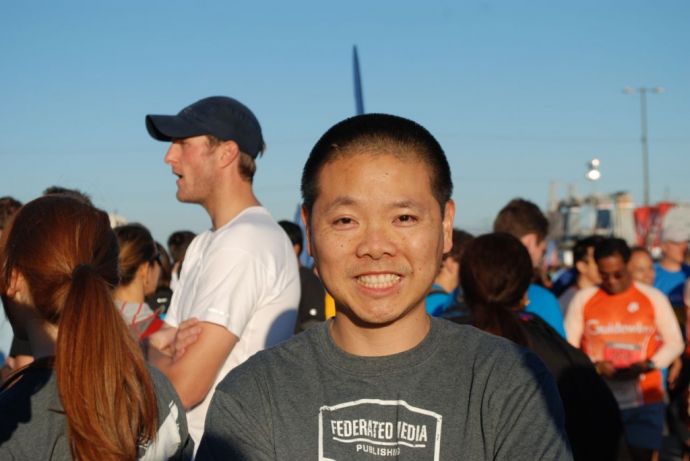 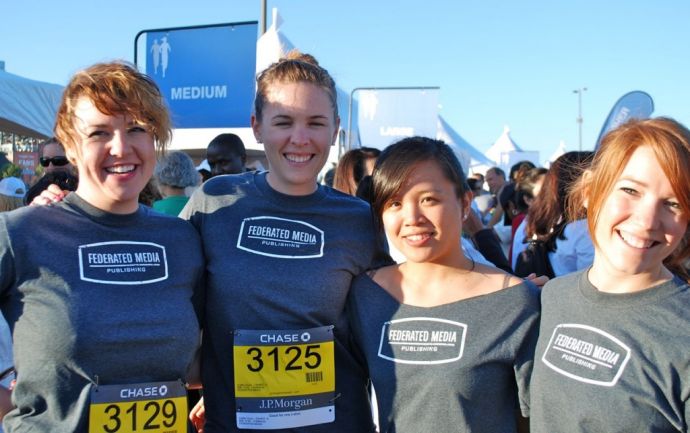 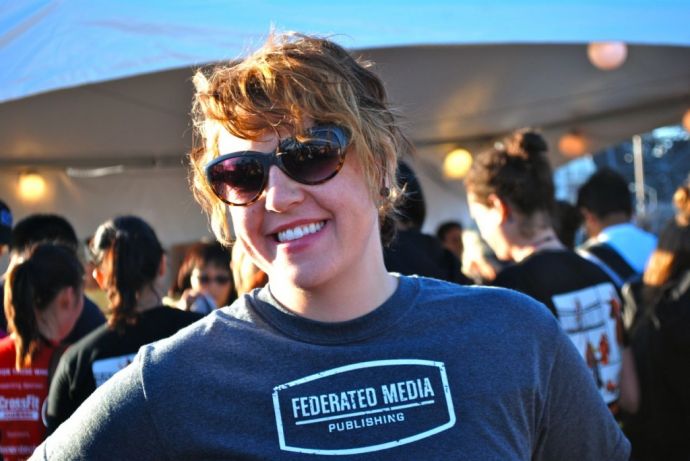 Kim still needs sunglasses as the sun lingers for its last moments of the day. 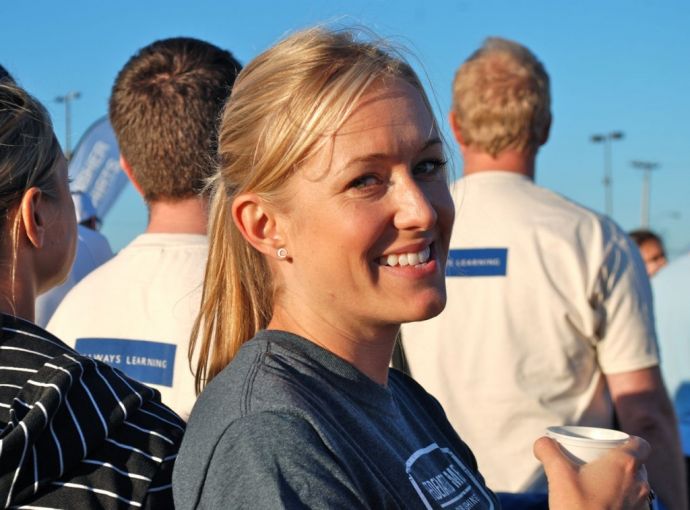 Here's Flora heading over to the starting line. 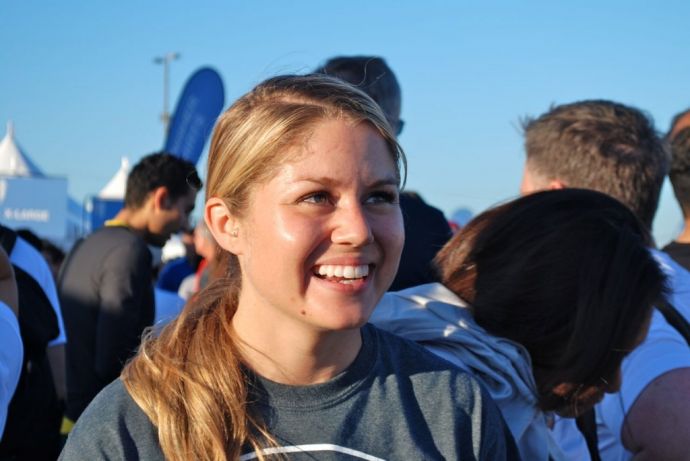 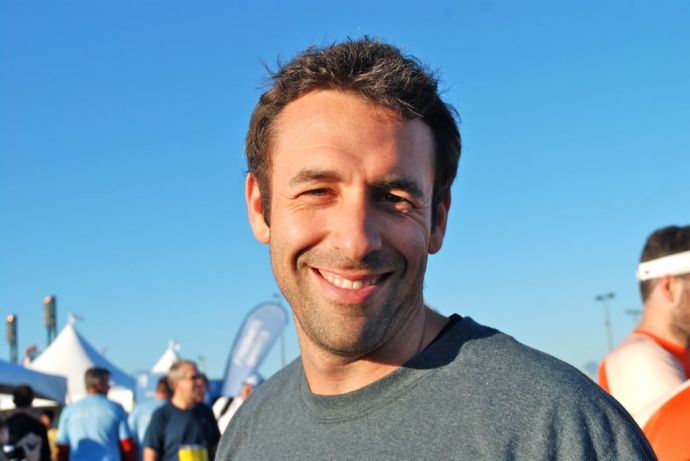 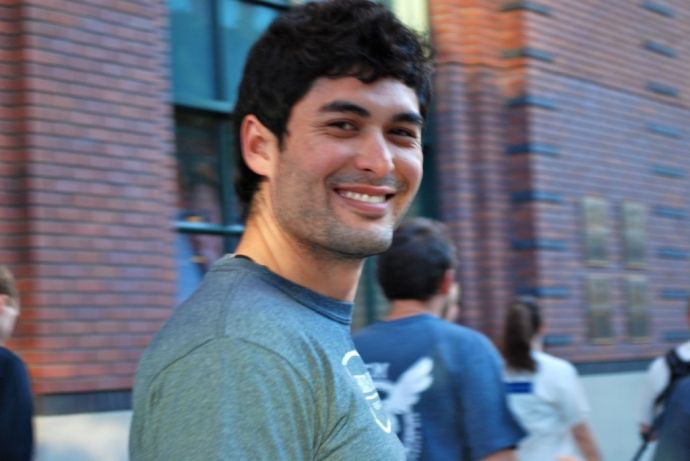 That's Shane. He's pretty humble, and only after the race did we find out just how fast Shane can run. He was FM's fastest runner with a time of 24:08. Well done, Shane. 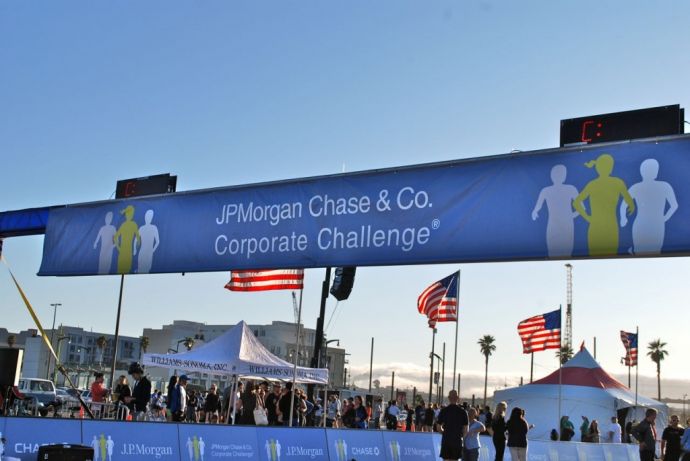 The race conditions were perfect. It was still relatively warm, despite the fog you see approaching in the background. 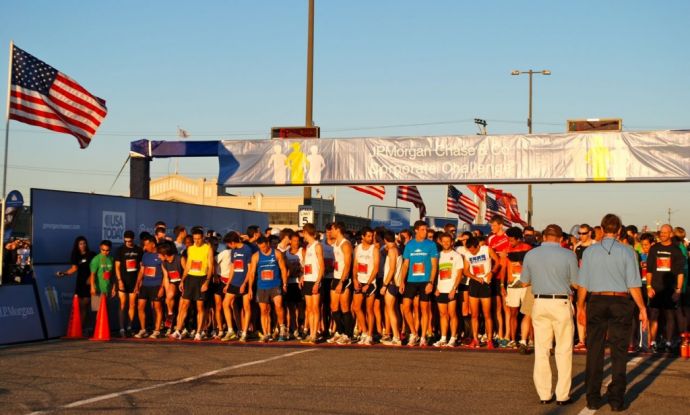 Then it was time for the race to start. An impressive 8,700 runners laced up and lined up. Some were in it for the competitive spirit (aka, out for blood); some were in it for the fun. The first wave was comprised of the elite runners. I watched a bunch of them warming up. We're talking serious runners. 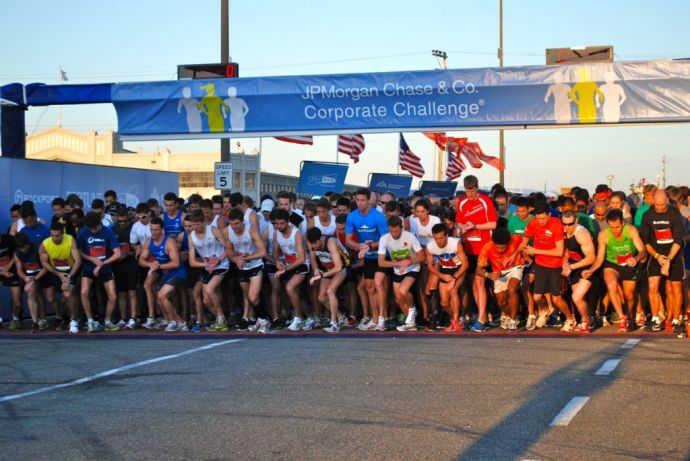 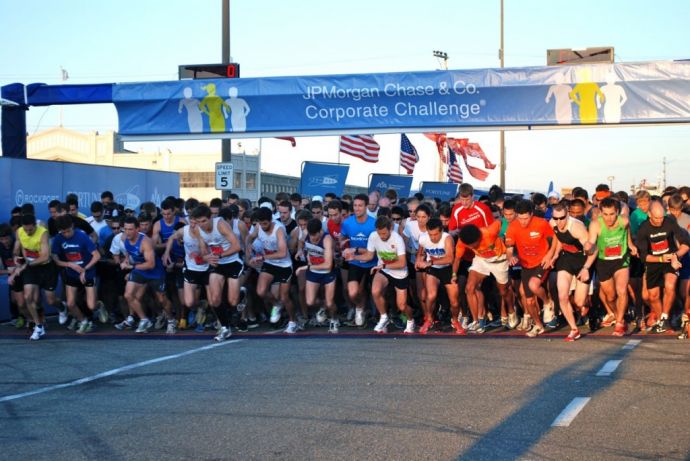 And here's the crush of them all try to edge each other out. 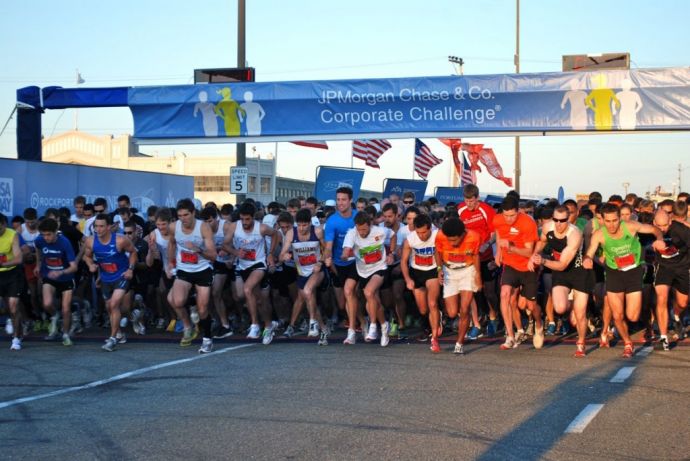 I get claustrophobic just looking at them all sandwiched in there, hence me being a sideline spectator. 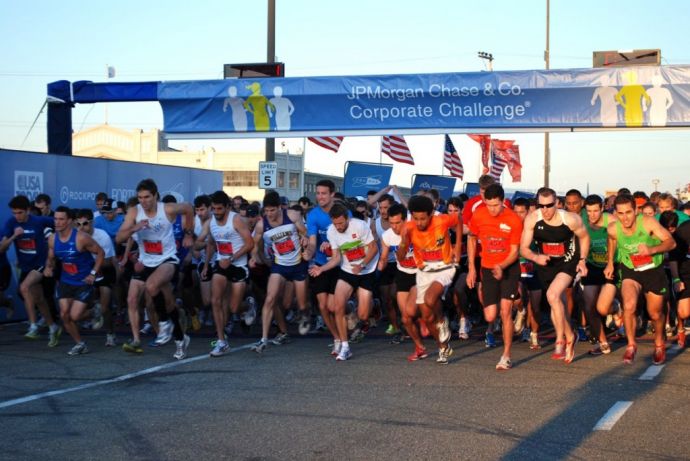 No, that's not my shadow, but I'm not too far from that person. This photographer had to move quickly as to not get pancaked. 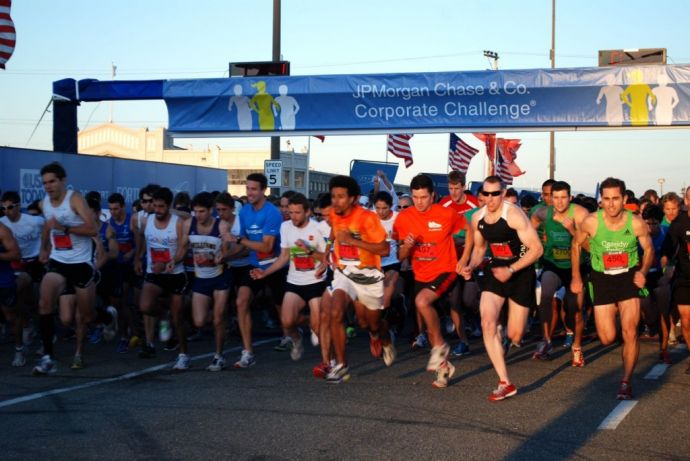 Yikes. Here they come. And pretty much after that it was just a crush of people running by me. I didn't see any of the 19 members of Team FM. I did see lots of members from other teams including Genetech, Google, AOL, Zynga, PG&E, Salesforce, and Williams Sonoma. Everyone but my team.

It got dark so taking pictures became tricky. The 3.5 mile run started and finished in the same place, so by the time the last wave of 8,700 runners had cleared the starting line, it was almost the time for the first runner to circle back to the finish line. The winner was Keith Hankins who finished with a time of 16:57 and the first woman, Brooke Wells, came in with a time of 19:22. Amazing.

But the highlight for me was when Karleen raced towards the finish. 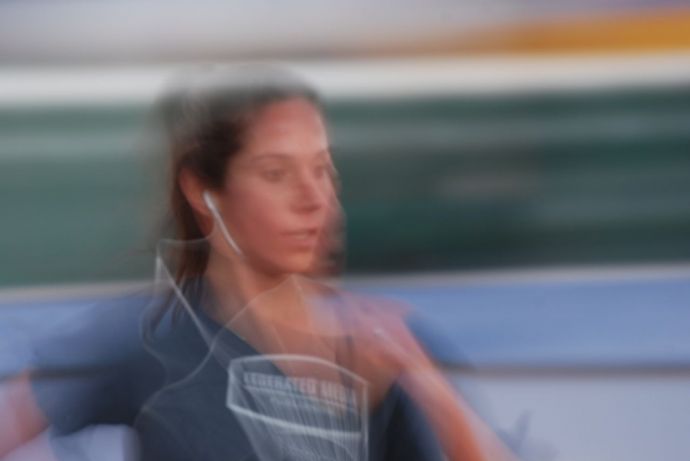 I was fumbling with my camera and as lousy as this picture is, I love that I got her in action, blurriness and all. She was bolting toward the finish; the blurriness indicates just how fast she was going. Shane was the first FM-er to cross the line, but she was the second and the first woman. I was so excited to see her crushing it and with the impressive time of 25:17. Awesome, Karleen.

So thanks FM for sponsoring this event. The money raised from the run went to support the Larkin Street Youth Services, a San Francisco-based center for homeless youth. It felt good to participate and be part of the team, even if you were holding everyone's sweatshirts and iPhones on the sidelines, like I was.

Congrats, Team FM. Thanks for showing up.