We went to AT&T Park last night to watch the Giants play. They were up against the Nationals, the DC-based team that wasn't around when I lived there. We were treated to the game by my friend Richard and his son Ry. 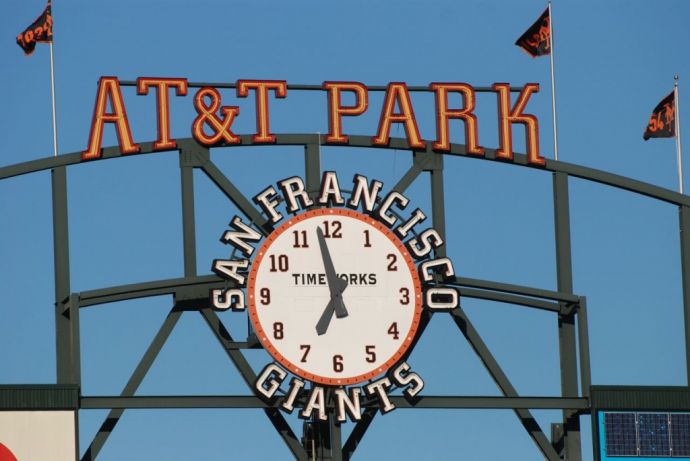 Like many ballparks built in recent years, AT&T Park is beautiful, but I think few would challenge that this ballpark rates among those at the top. It sits right on the San Francisco bay and at dusk, fans are treated to not only a game, but a spectacular view. 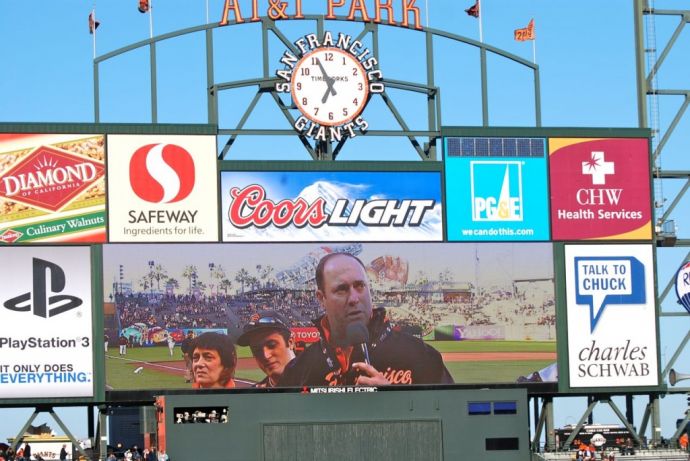 This is our jumbo screen showing former Giants player Will Clark, nicknamed Will The Thrill. This is Will announcing that it was Autism Awareness Night and acknowledging Autism Speaks, an organization that he supports. Until 2003, B had a cat named Thrill named after Will Clark. 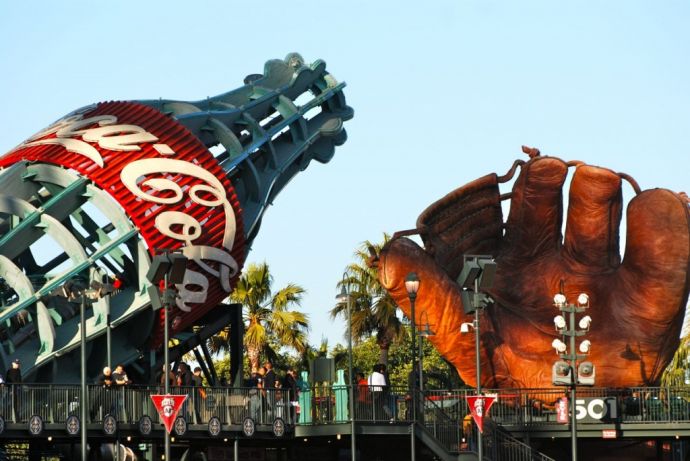 We had great seats. We sat between 3rd base and home. I took this picture of the outfield from our seats. On the left is an 80-foot Coca Cola bottle with playground slides that will blow bubbles and light up with every Giants home run. Let's just say we didn't see bubbles last night. It also doubles as slide that’s a hit with kids and adults. Next to it is an old-fashioned glove, built out of steel and fiberglass. Weighing 20,000 lbs, the 1927 Old-Time Four Fingered Baseball Glove stands 36 feet tall and is a target for big-league hitters, but that would mean that they’d have to hit some 501 feet to do so. 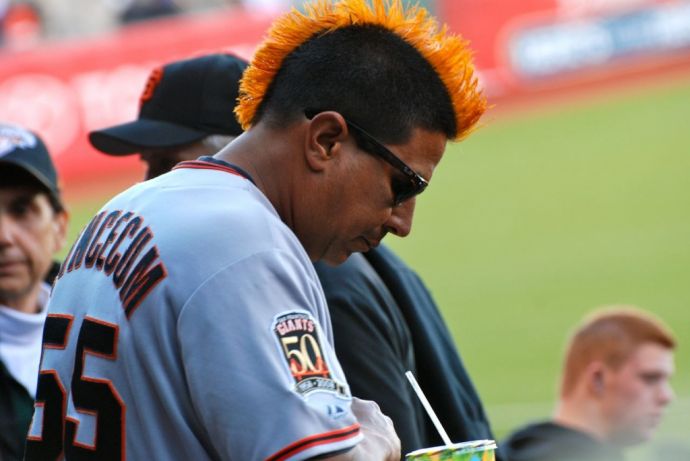 People watching here never disappoints. Here's one of our mohawk-sporting, devoted fans, wearing pitcher Tim Lincecum's number. He got his drink, is settling into his seat, and he's ready to roll. 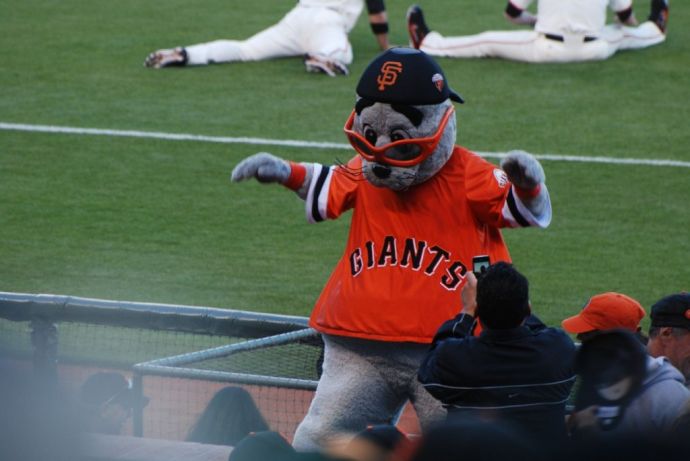 Meet Lou Seal, the Giants' mascot, since 1996. He gets the crowd revved up throughout the game. In the background you can see some of the players stretching out pre-game. 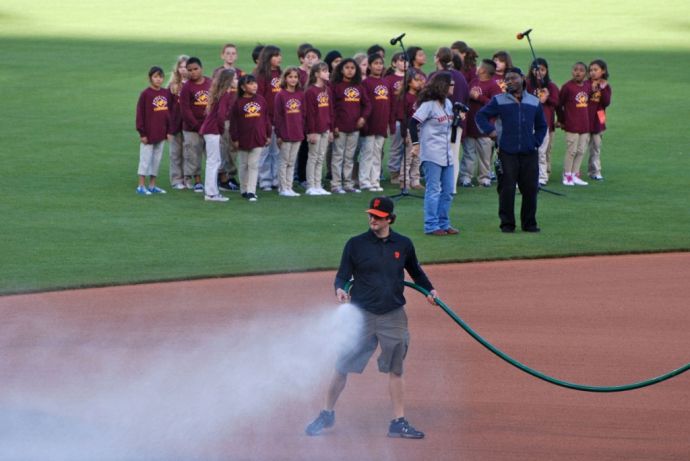 There's lot to do before a game. Here's one of the four or so guys watering down the dirt so it doesn't blow up in the players' faces. Behind him, the girls choir who will sing the national anthem preps for their big moment. 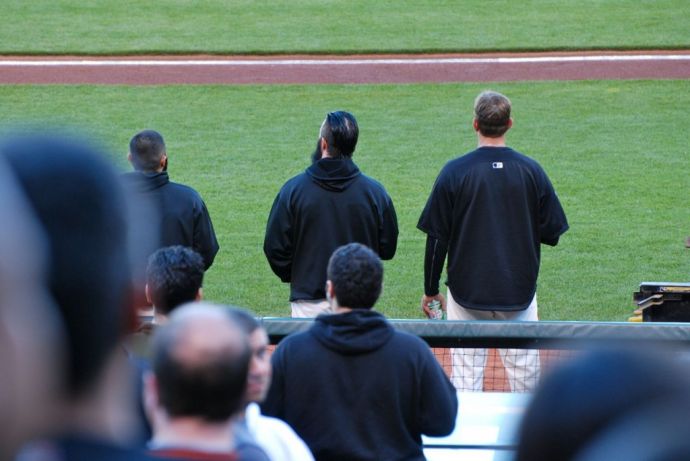 The national anthem brings the players out of the dugout. On a team that's known as having a cast of characters, Brian Wilson leads the pack. That's him, Mr. Fear The Beard himself, from the back. He didn't play last night, but you can get a glimpse of the infamous beard. Even from the back, it's hard to miss. 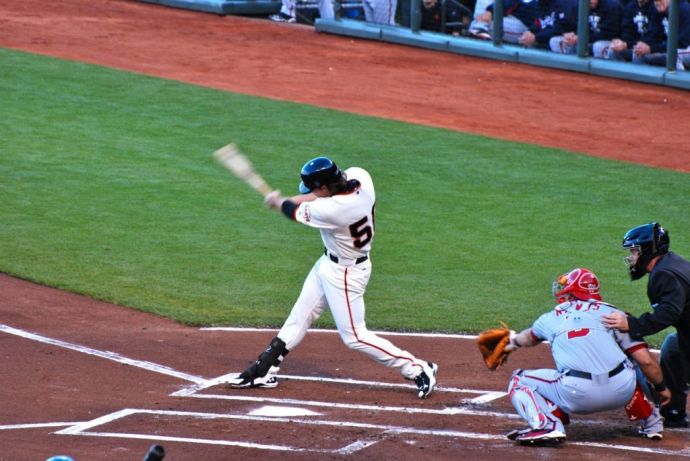 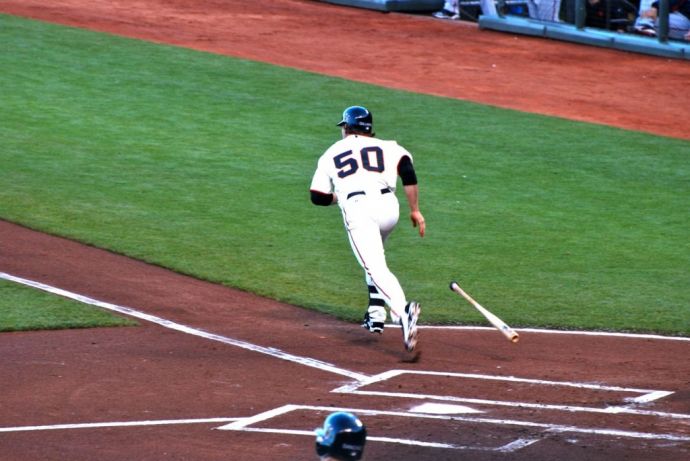 He got a hit and headed towards first. 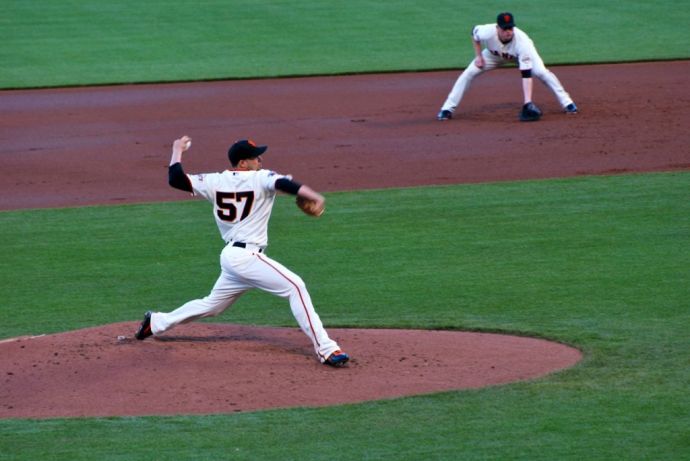 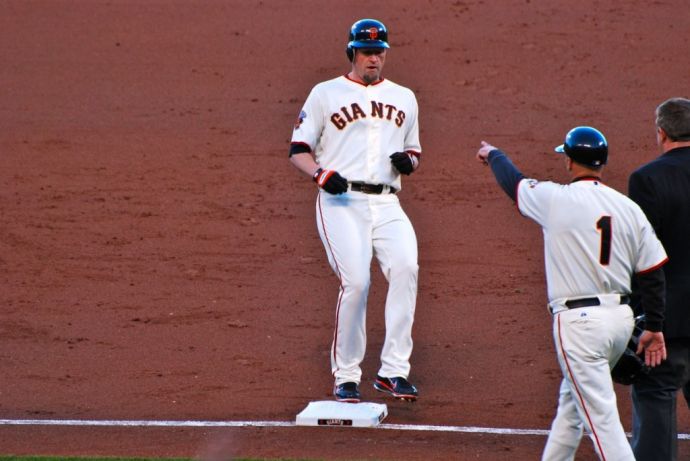 Here is Huff running to third after his triple. Nice hit, Aubrey. 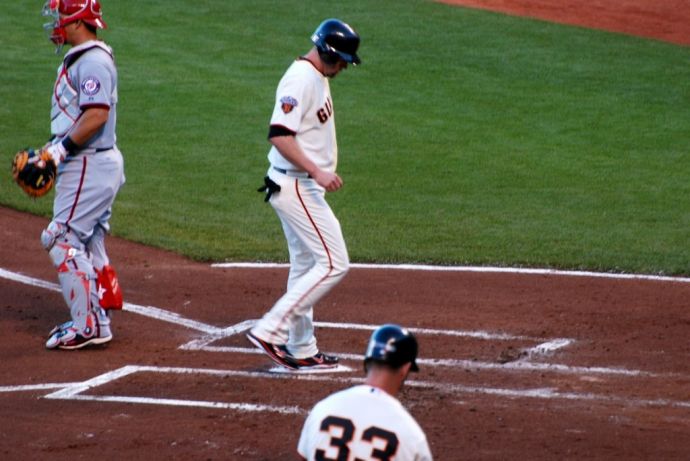 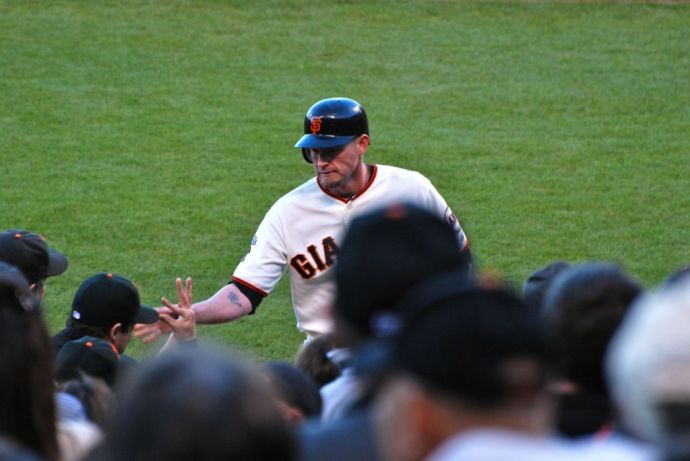 Props from the dugout (and a good look at his tattoo). 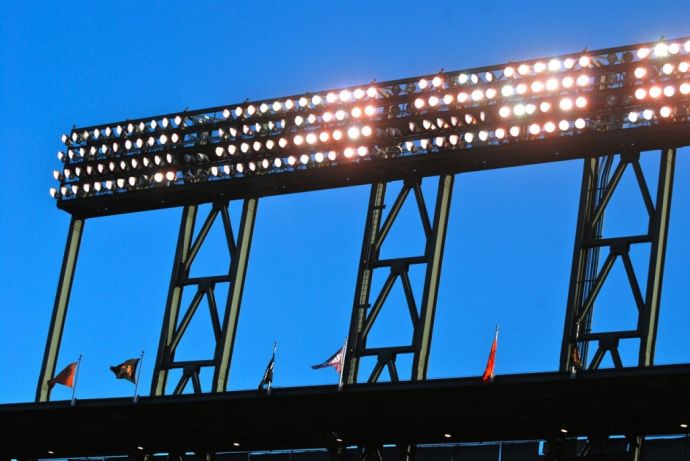 It was getting dark, so the lights went on. That's some wattage. 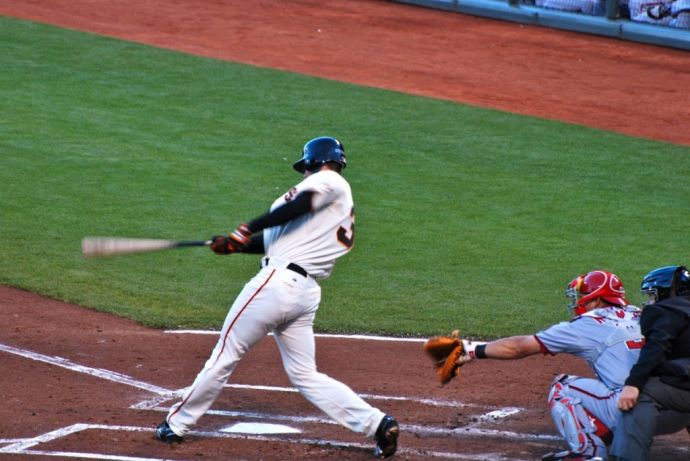 Unfortunately, things went south from there. 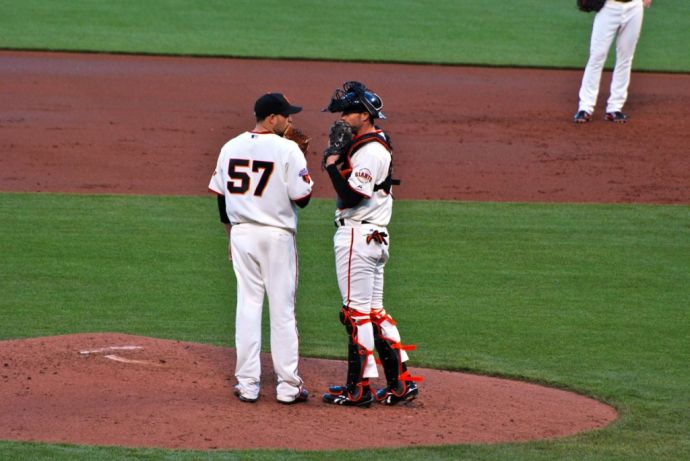 This was one of many pow wows on the mound. 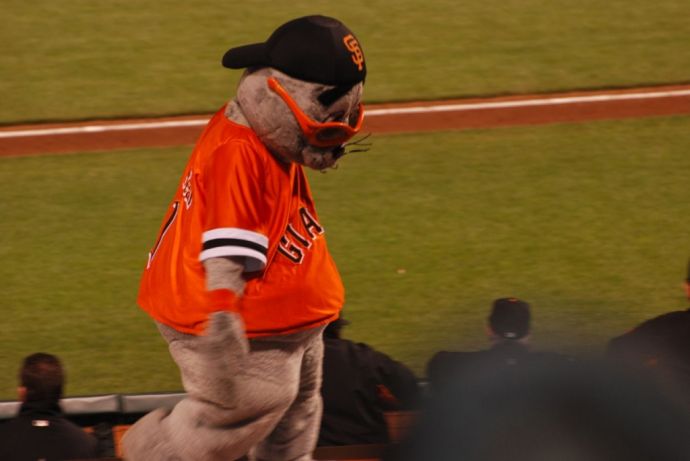 Not even Lou Seal could help. 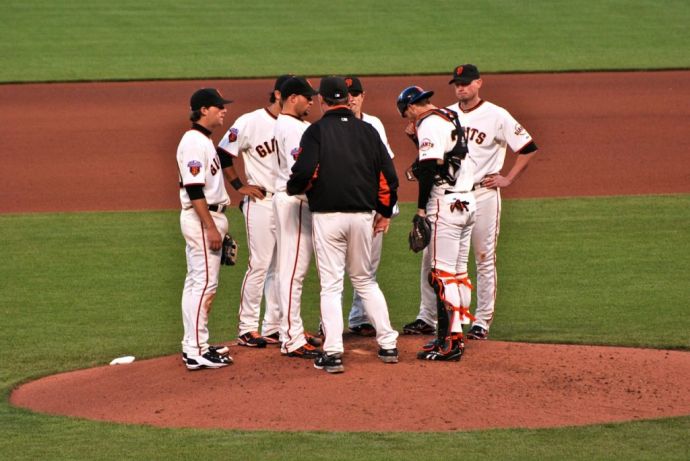 Another meeting of the minds on the mound; this time the coach came. 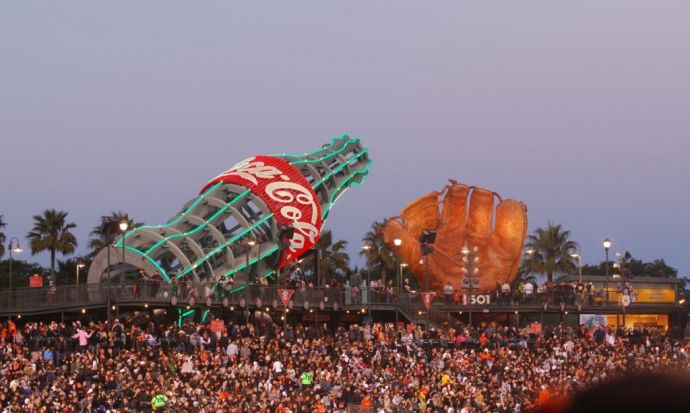 In the end, we lost. Nationals 2. Giants 1. Despite the loss, it was still a great evening, to be here with 21,000+ other people, overlooking the bay, watching the 2010 national champions, and hanging with Richard and his son.

Thanks, Richard, for the great treat. B and I had fun.