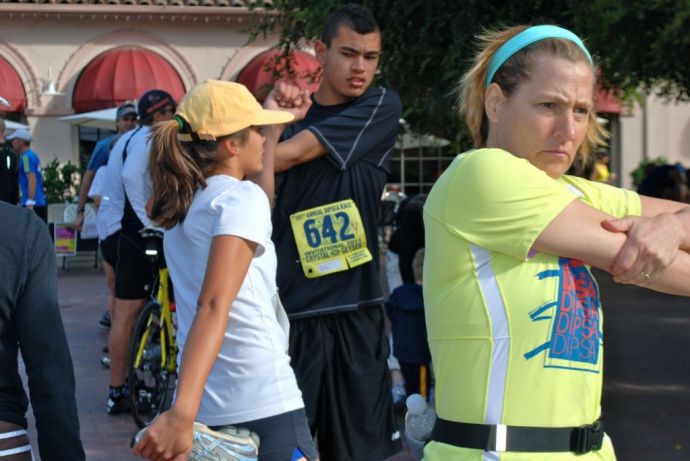 B and I went to the start of The Dipsea, a race held every year in Mill Valley, California. If you’re not familiar with The Dipsea, it’s the oldest cross-country trail event and one of the oldest foot races in the U.S. It’s 7.5 miles long and that doesn’t sound too bad, except for the fact that it’s an incredibly steep trail that at times narrows to a single lane. Within the first ½ mile, the race takes runners up a seemingly endless staircase, 688 steps to be exact. The Dipsea ends at Stinson Beach. 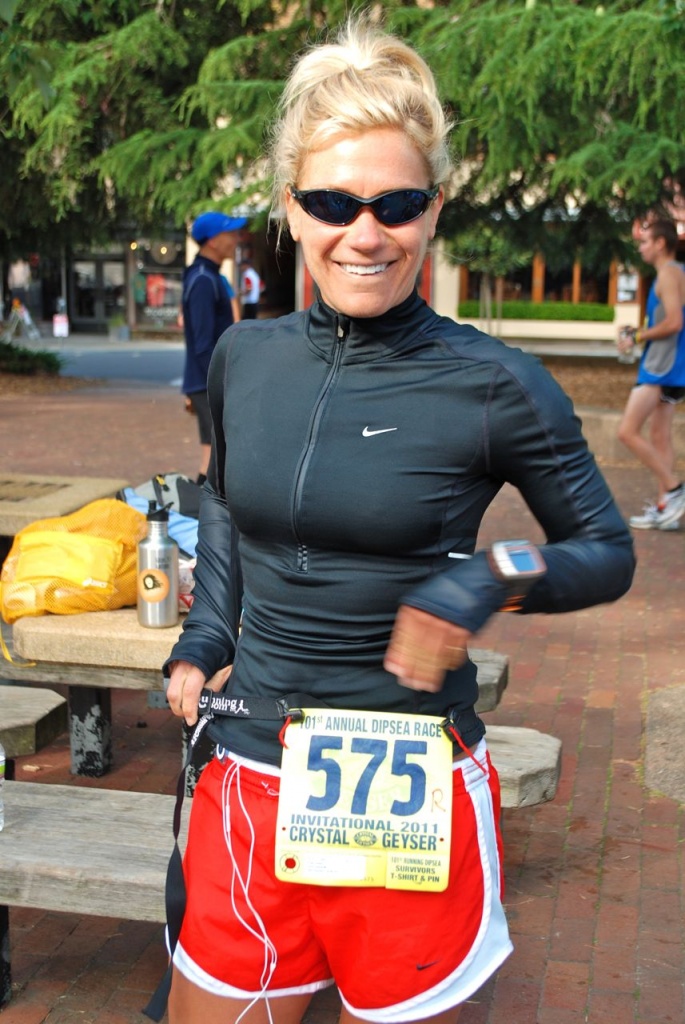 This is Kristi. She runs a bootcamp in San Francisco called Vyayar. I used to attend. Used to being the operative phrase here. Kristy is a serious athlete. Mega runner. She's in her pre-race prep mode. 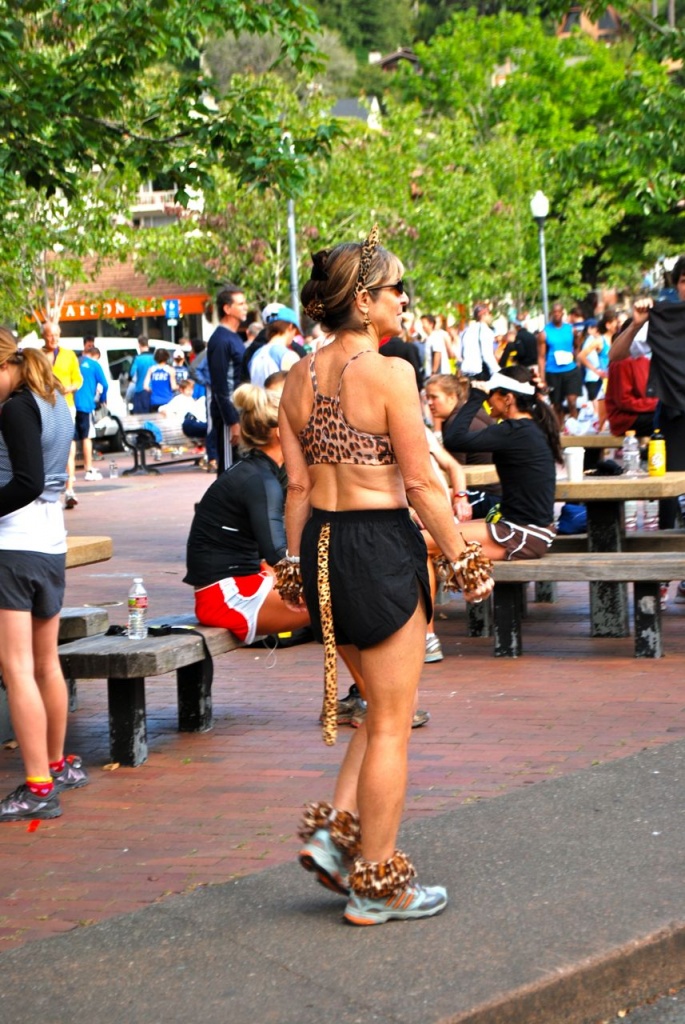 Unlike the Bay To Breakers, there aren't a lot of runners wearing costumes, except for a few. 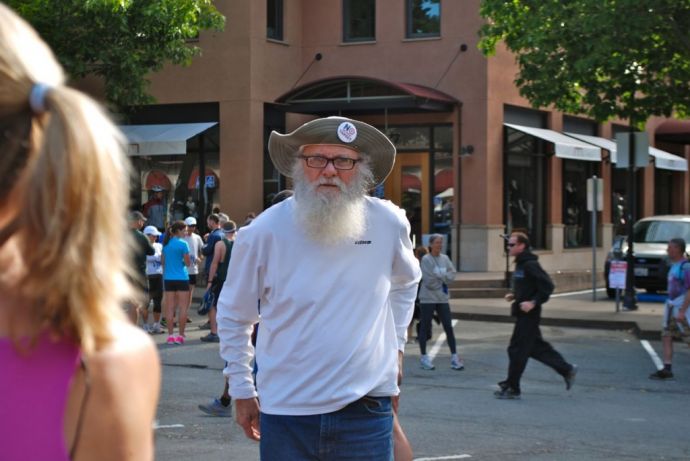 People of all ages run. But this is a pretty serious race, so you need to qualify to get in, and that's not easy, so the runners who make the cut can hold their own. 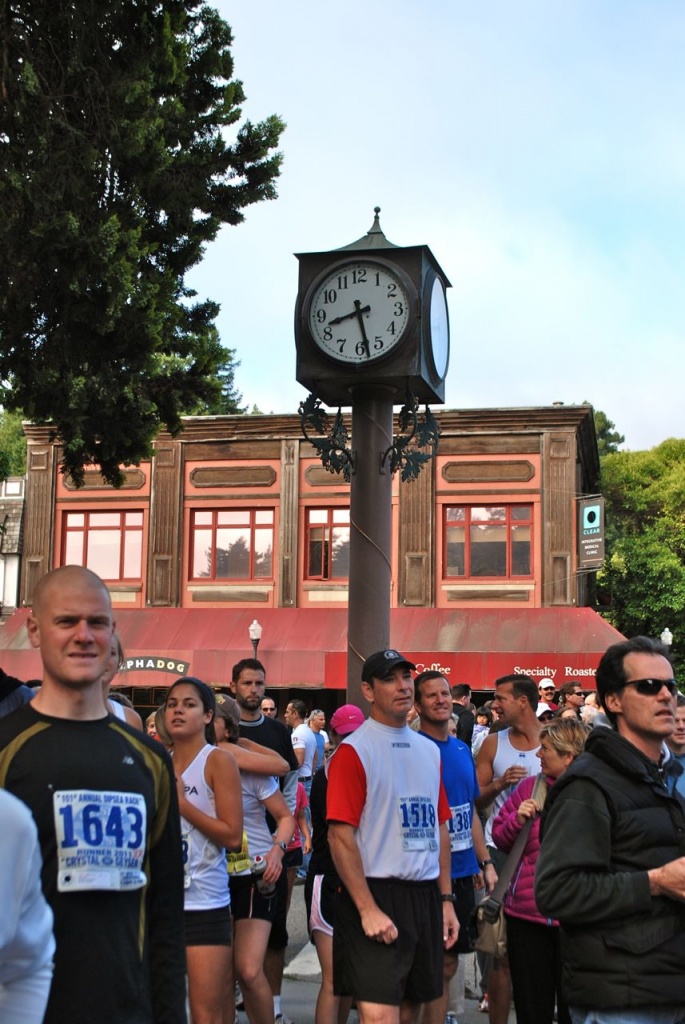 This year was the 101th race. There were some people who ran who had run 35 times or more. Later in June there are two other Dipsea runs, the Double Dipsea and the Quad Dipsea. The Double Dipsea has the runners going to Stinson (7.5 miles) and back for a total of 13.7 miles. Then there's the race for the uber serious (aka, kooky), the Quad Dipsea. That's there, back, there, and back again. A total of 28.4 miles over some crazy terrain. Nuts, in my book.

B and I watched the start of the race; we didn't see the finish. The race is limited to 1,500 runners and no one can run with an iPod or headphones of any sort. This is for safety, a good rule. They group people according to their age and qualifying time, and the race organizers mix it up a bit by pairing young folk and older folk.

There’s a great spirit here. It kicks off in downtown Mill Valley, a beautiful town in Marin County, but more importantly to me, where B and I got married.  The race got under way at 8:30 a.m. 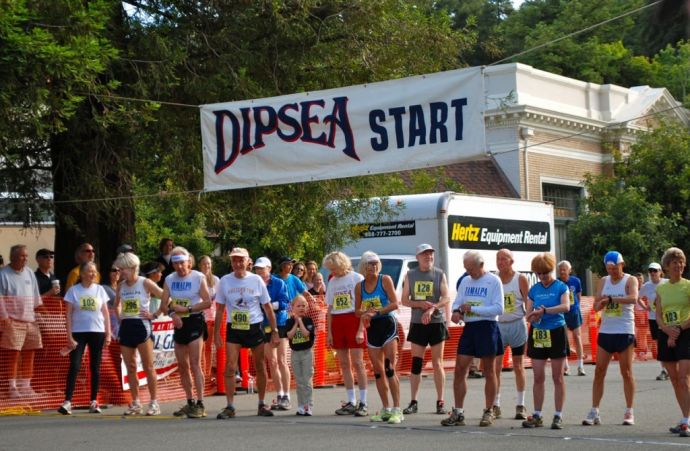 This is the AAA group. They're the oldest group and the youngest group.  See the seven year old girl in the mix? She won her age group. So what if she was the only one in it, she won. 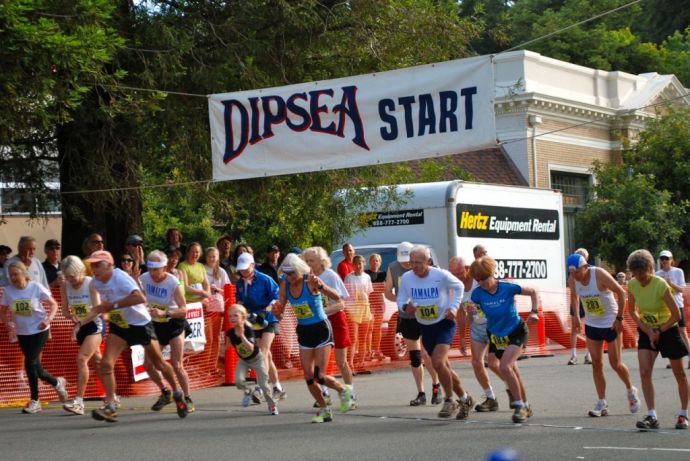 And with a 3-2-1 countdown, they were off and The Dipsea was underway. 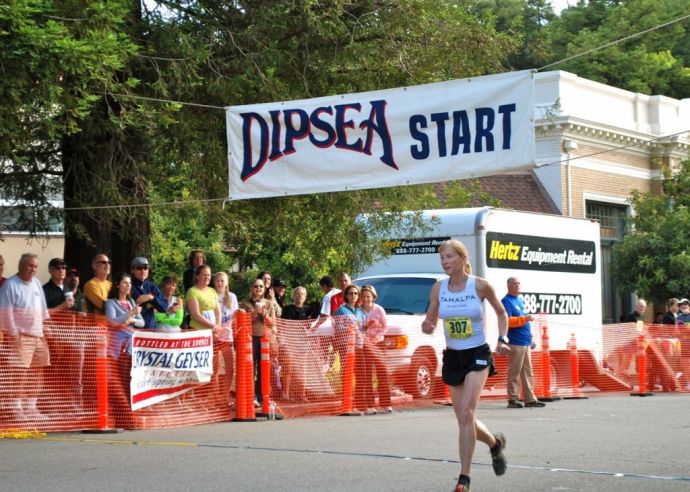 This gal was 62 and the only one in her age bracket, so she got to have her own private start. Look how great she looks. 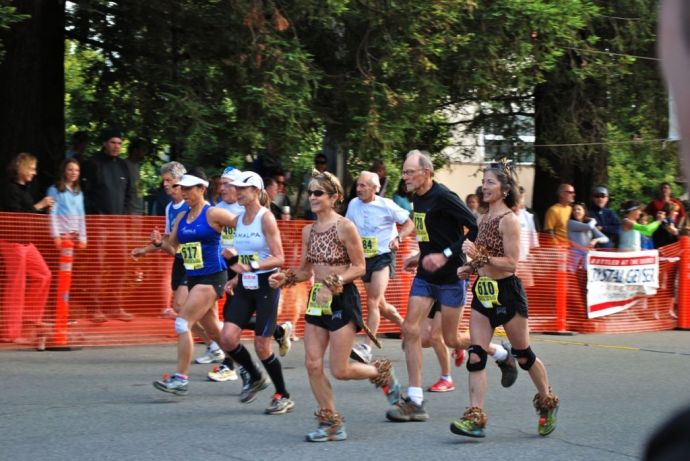 Remember cat woman we saw earlier? There she is running with a fellow gal pal runner. 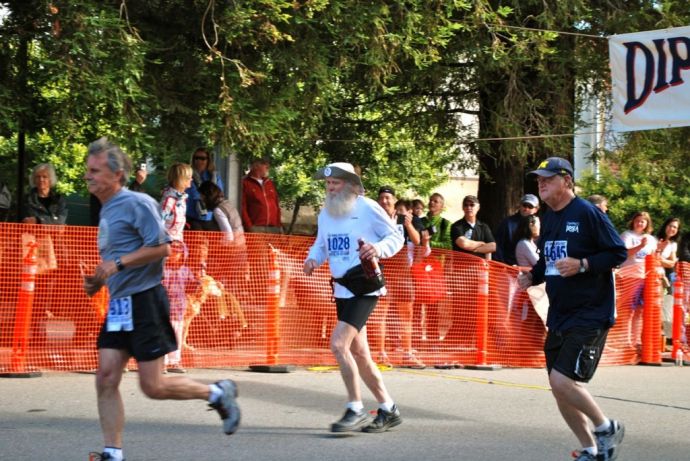 Here's our bearded friend. He's off and running. 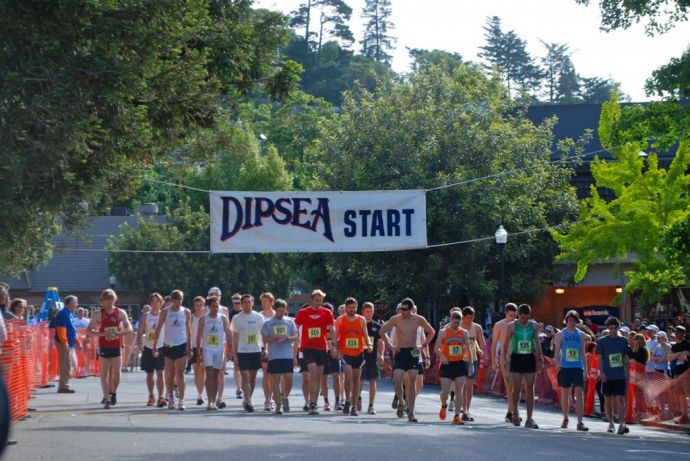 While runners gets on the mark and prep for their start, another group gets ready behind. 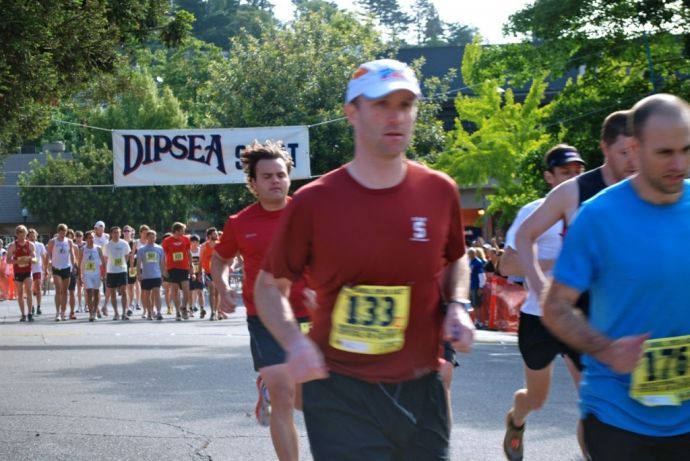 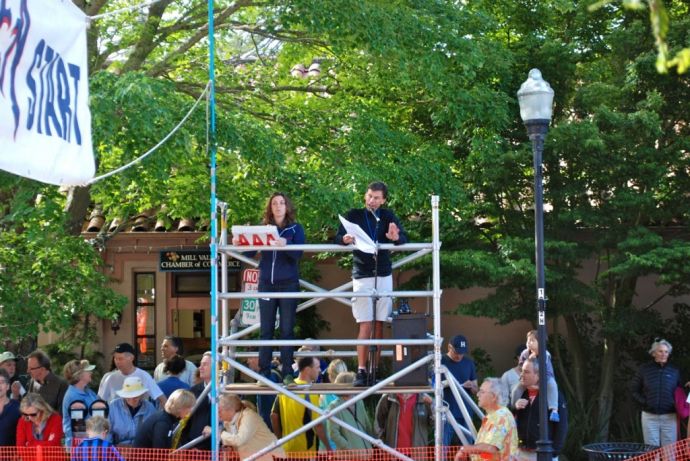 That's announcer Barry Spitz. What's so nice about this race is he knows most of the runners, so while you're standing there at the start, Barry offers commentary about several runners on the mark. It makes the race feel informal, intimate, and family like. 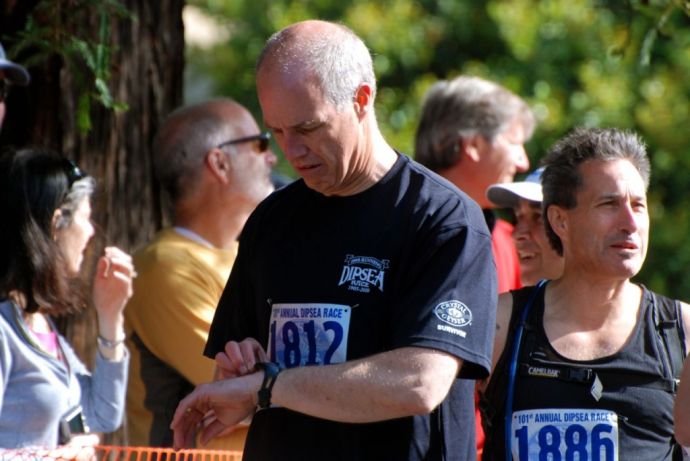 Most everyone who started the race futzed around with his or her watch. Everyone is preoccupied with time. 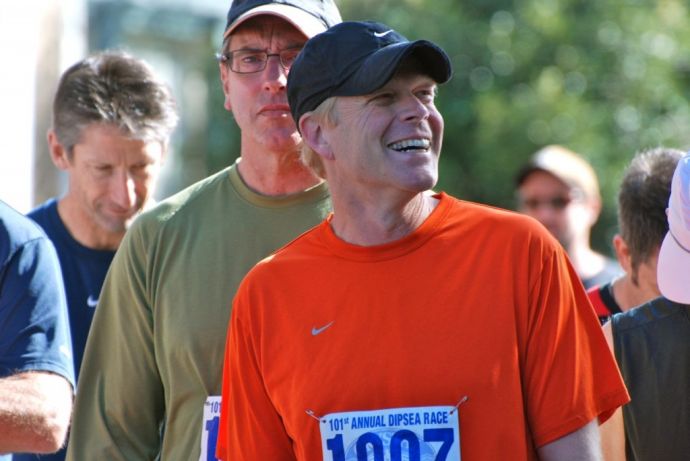 Amidst some nerves, there still were plenty of smiles and laughs. 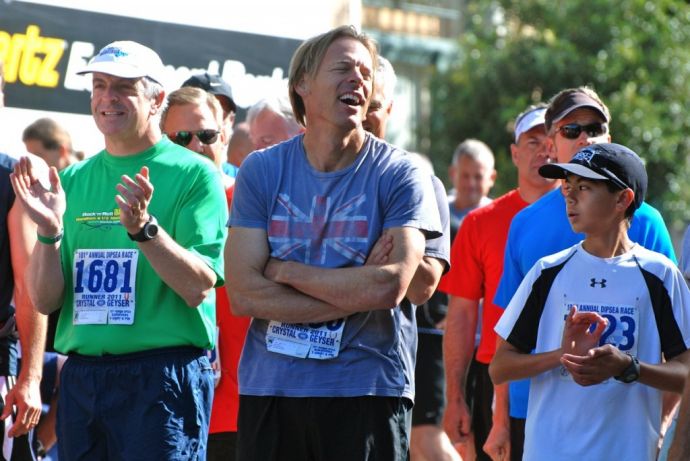 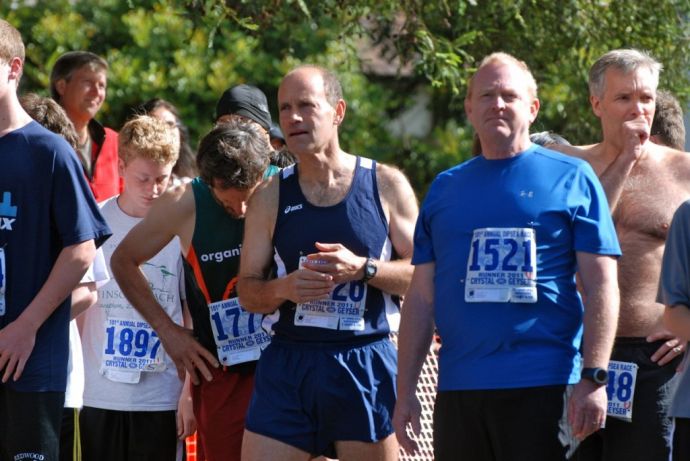 The starting-line dance. Everybody has his own version of it. 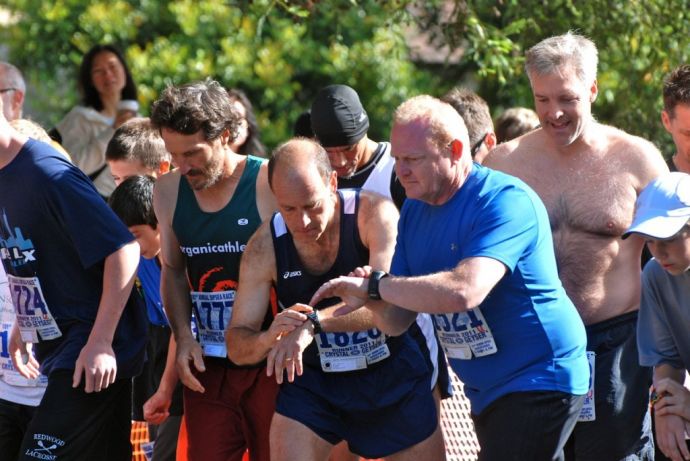 More watch futzing. See the guy in the back with the black cap on? He was recently released from San Quentin and had been part of San Quentin's running program. Now he's out. He got a round of applause from the crowd. 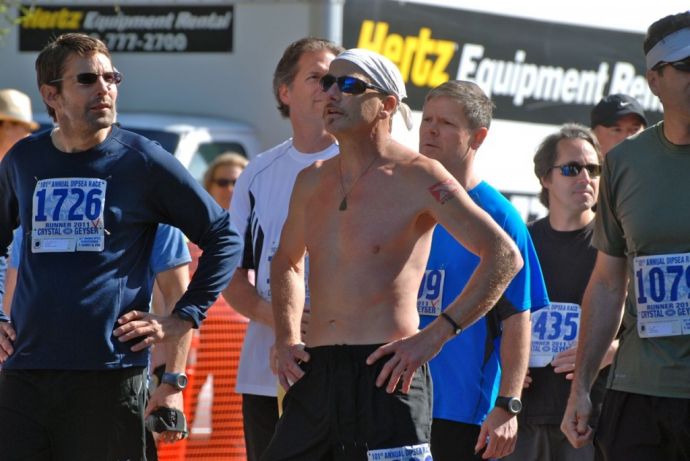 It was warm enough for some shirtless runners. For men, that is. 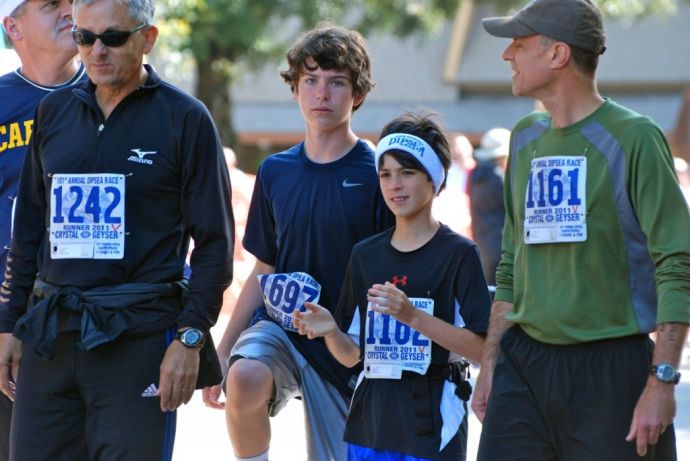 I love this youngster's headband. He's in the spirit. 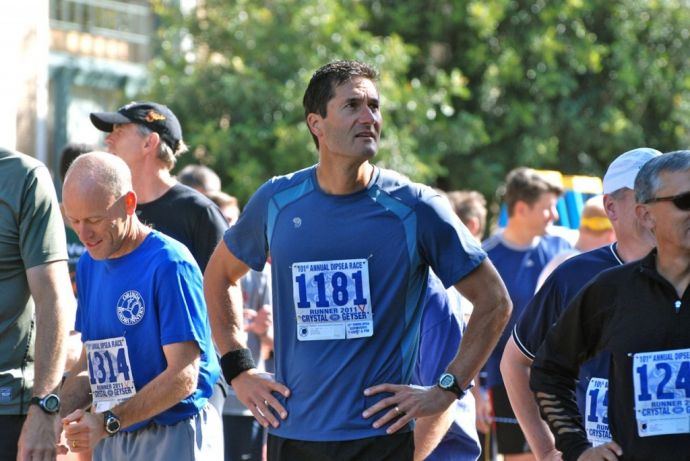 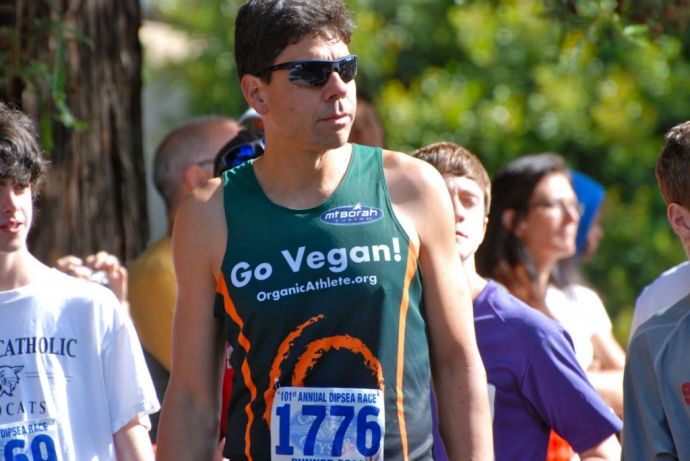 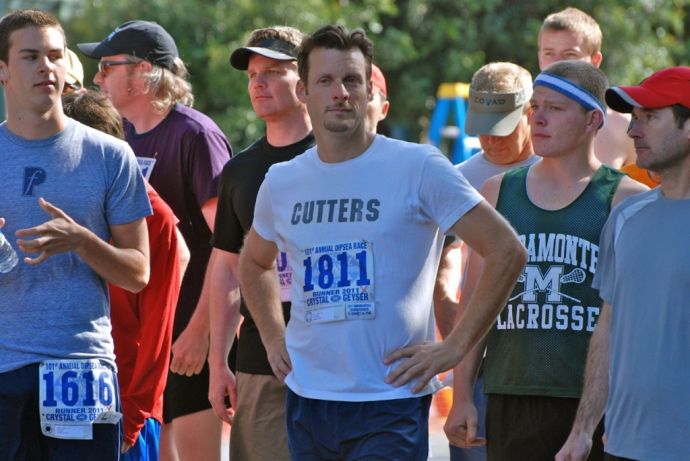 I love this guy's shirt. Remember The Cutters in Breaking Away? An all-time favorite movie of mine. 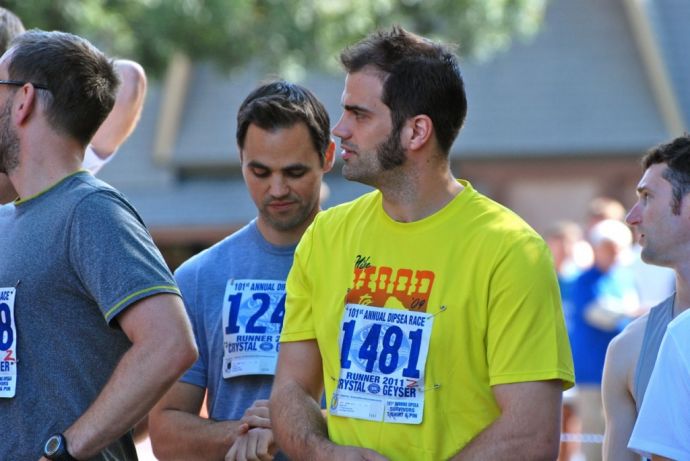 This guy is sporting some nice sideburns. 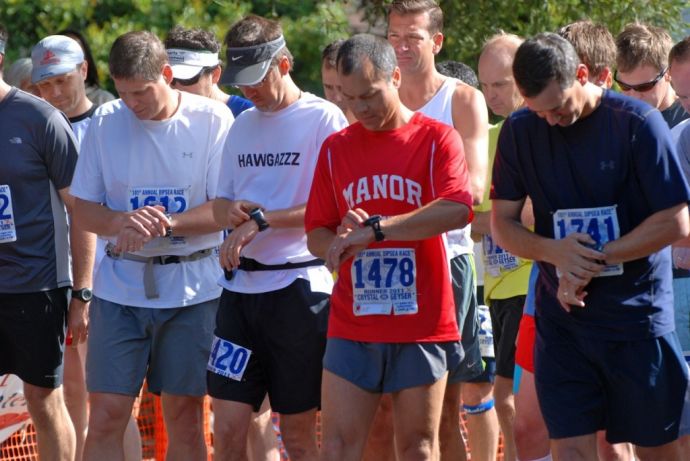 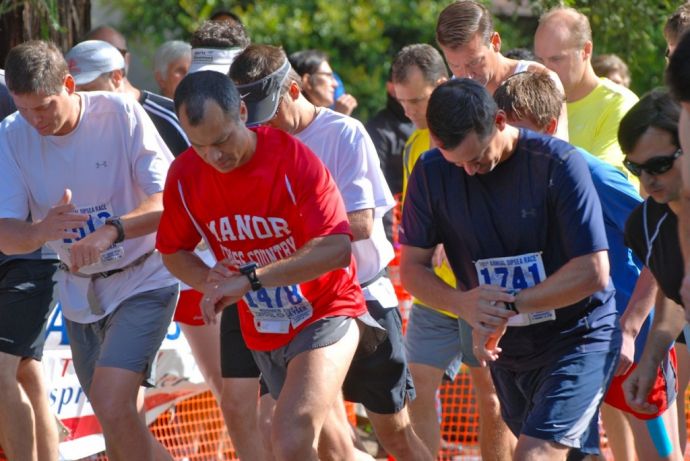 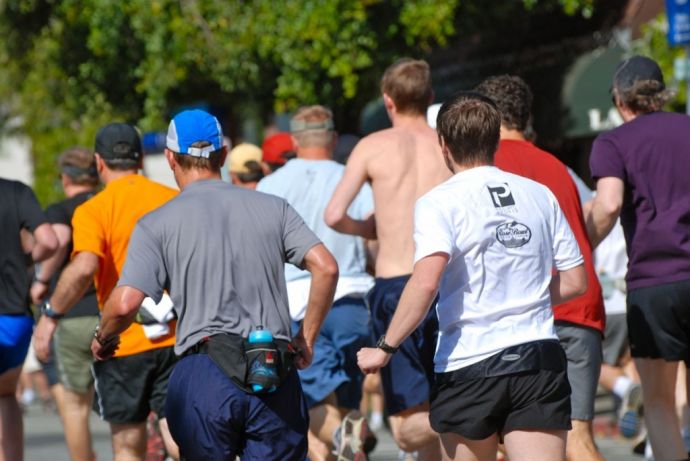 They make it look easy, don't they? 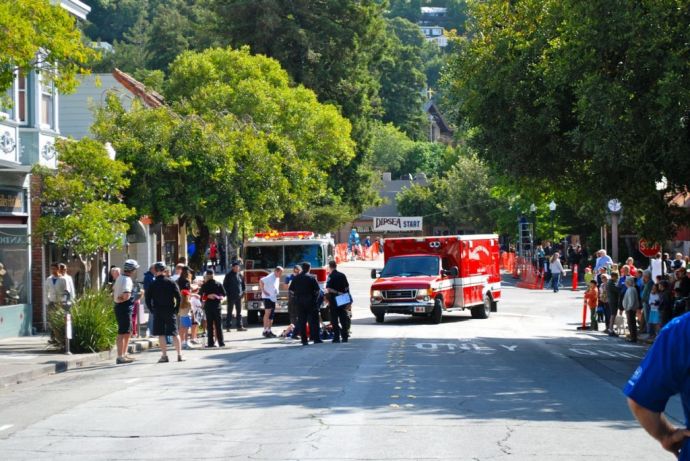 There was one mishap in the beginning of the race. A youngster went down, but he popped up again and seemed to be ok. It was scary for a minute though. 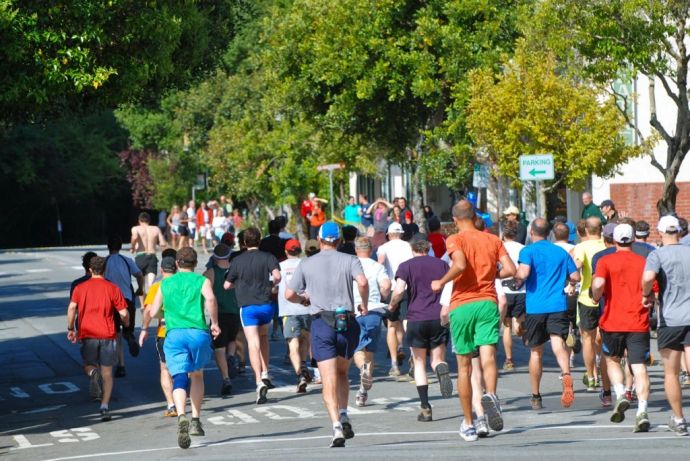 What a fabulous morning. My friend Anne was doling out water along the race course. She's usually in the race, but this year, she sat out. She still had a good time.

The winners are listed here.

So thanks Dipsea organizers for hosting this. It was a treat to watch, and congrats to all the runners.