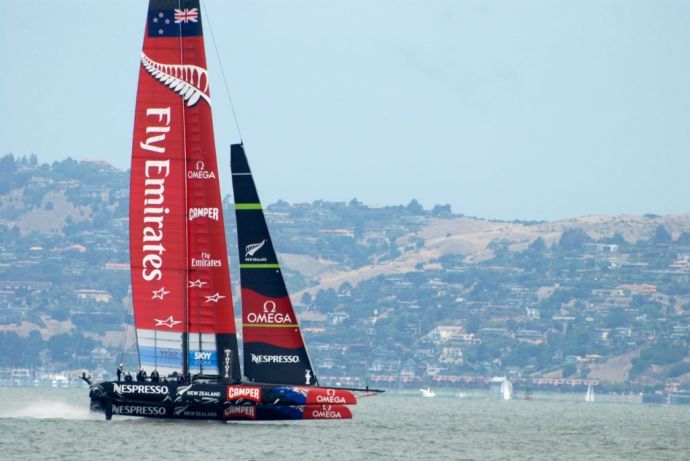 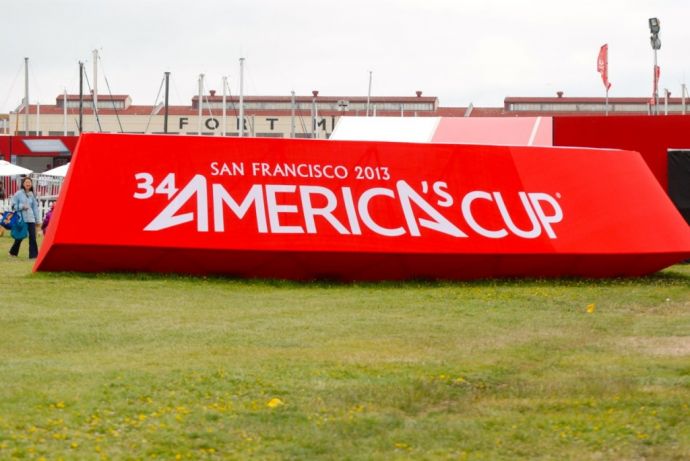 The race starts down just off the Marina Green where there are several hospitality tents set up. The trophy was on display for fans to see. 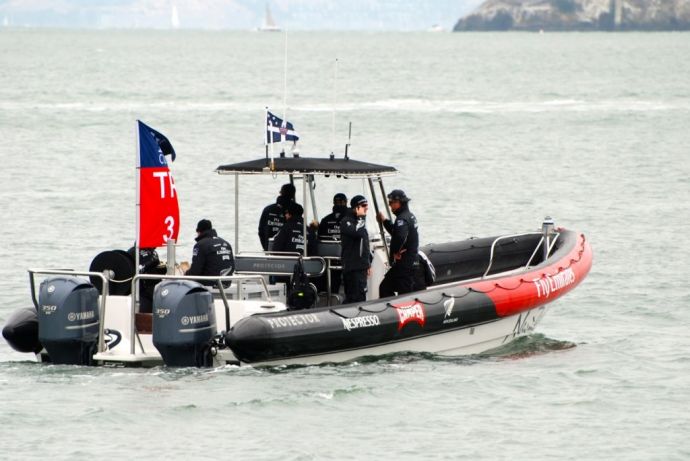 My college roommate Kathy is in town. Her husband, Pete Melvin, is one of the designers of the New Zealand 72' boat. He was in one of the boats that trailed the race boat. It was hard to tell which one he was, since all the guys seem to be wearing the same thing. Are you one of these guys, Pete? 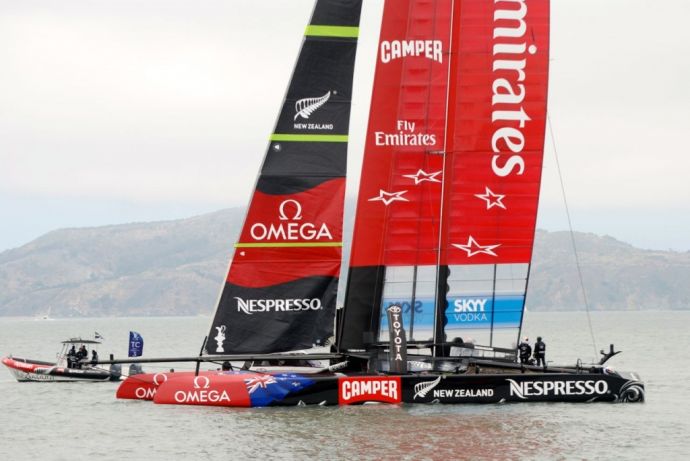 It's a good looking boat, even with all the logos. 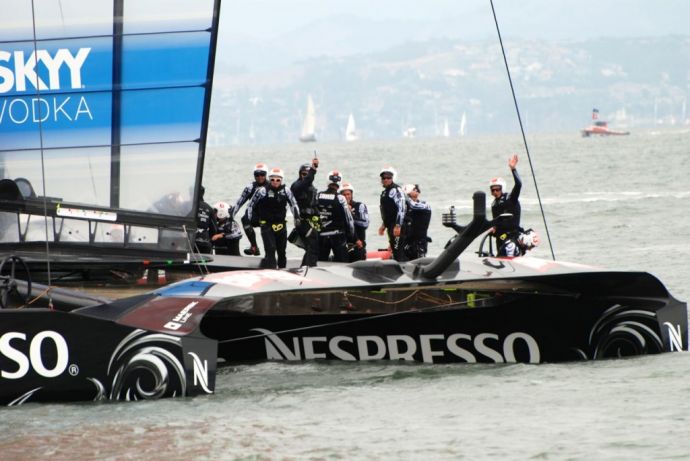 The race and team were announced, the racers gave a wave.... 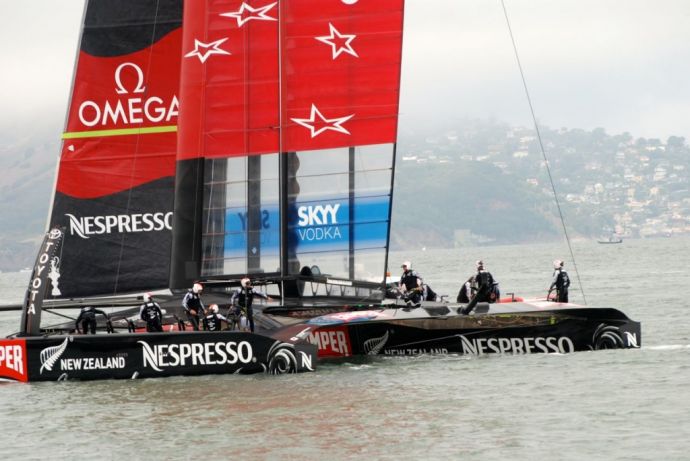 ...and with that, they were off to the starting line. Lots of scurrying around at this moment. 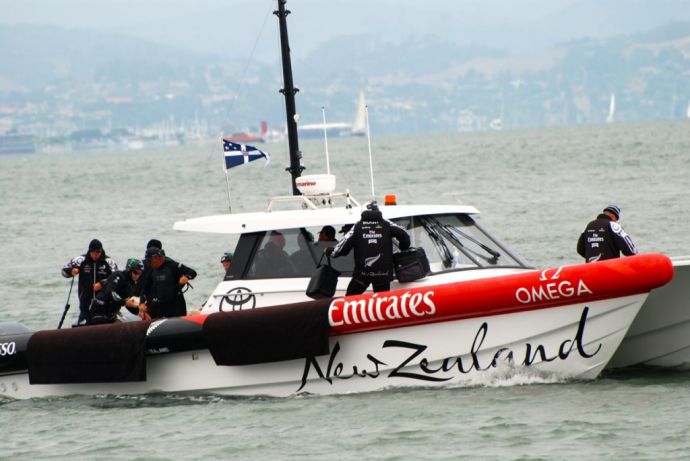 You on this boat, Pete? It kind of looks like a scene out of a James Bond film with all that equipment. 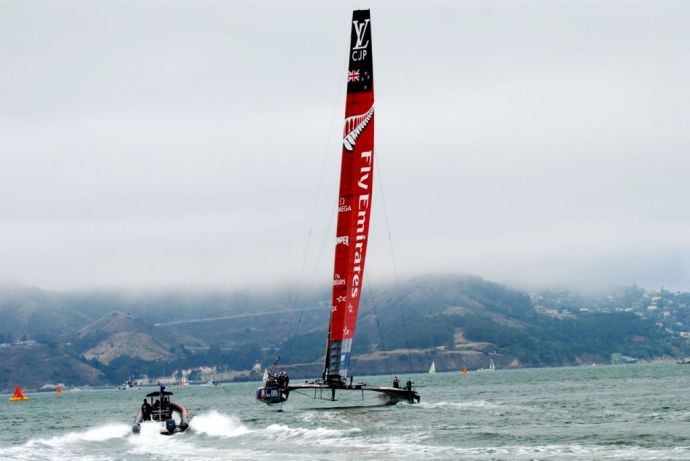 Off they go, not even touching the water on one side. 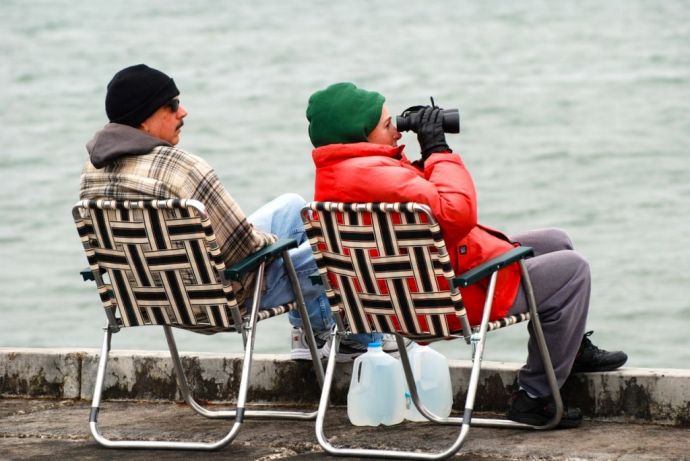 A reminder of the lovely weather in San Francisco during summer. Required clothing = snow jacket, hat, boots, and leather gloves.  Yes, it's July. 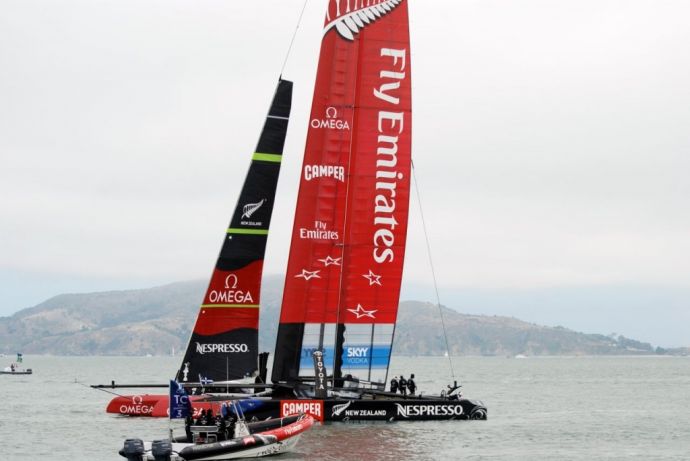 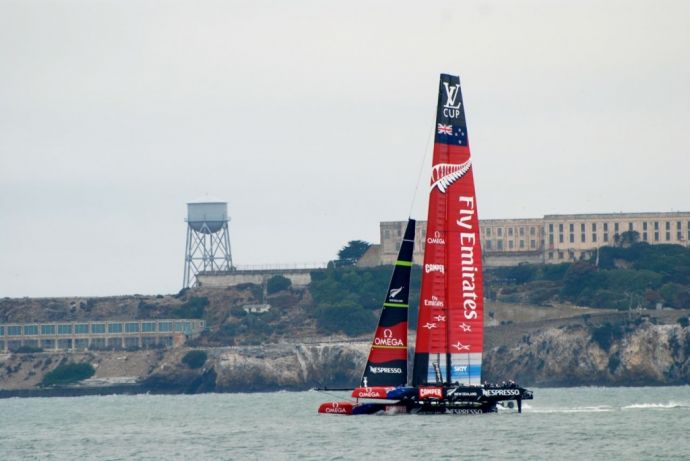 Here's Emirates Team Zealand as they fly by Alcatraz. 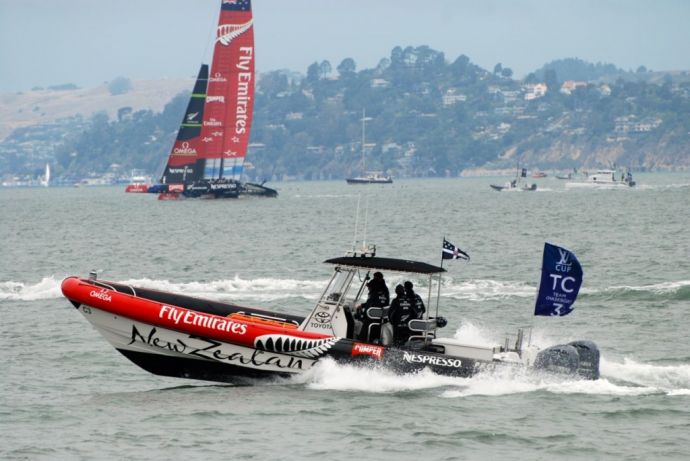 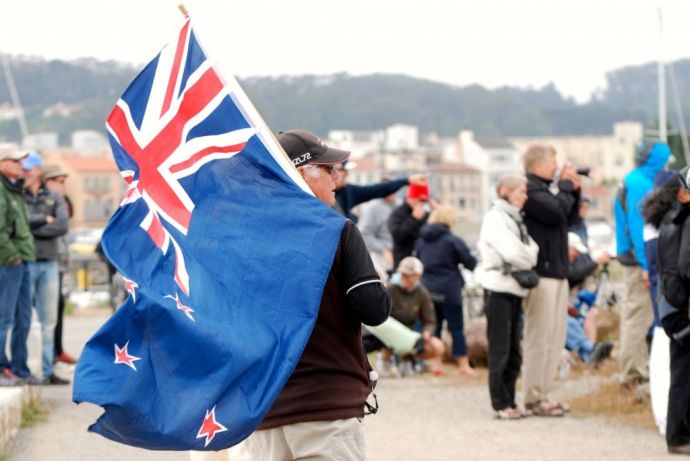 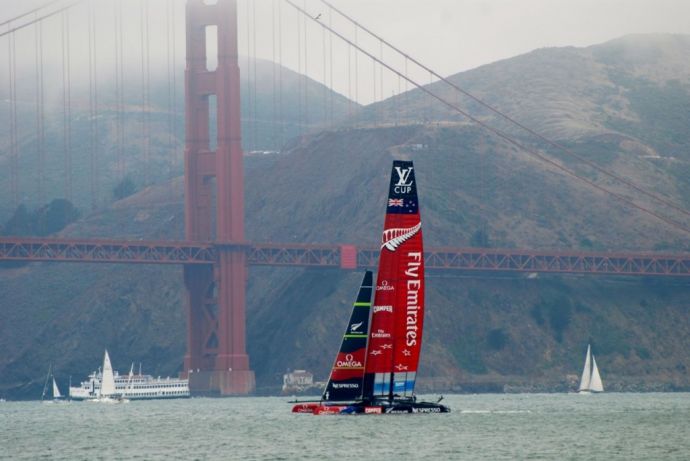 The sun struggles to peak through as the boat swings by the Golden Gate Bridge. 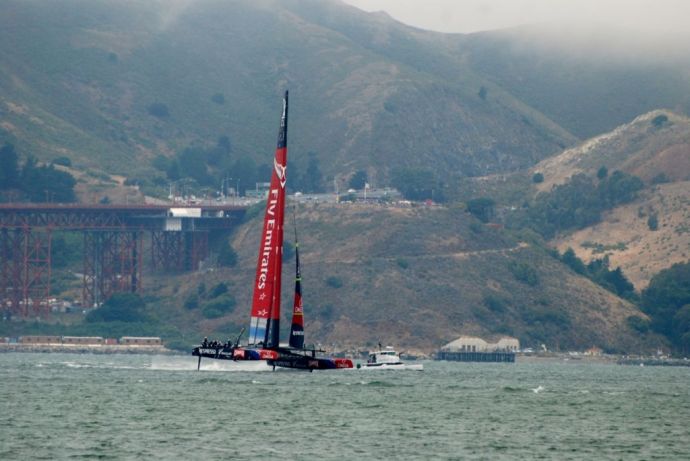 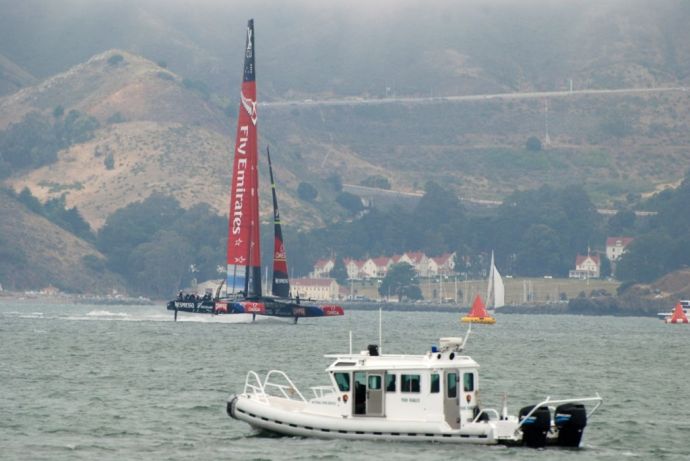 That's Cavallo Point in the background. A favorite spot for cocktails on a porch. Note where my priorities lie. 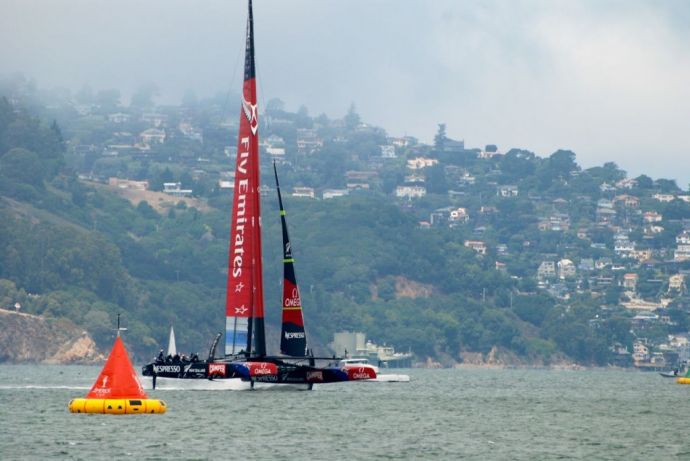 Thank God for that orange buoy for a pop of color on this gray, gray day. 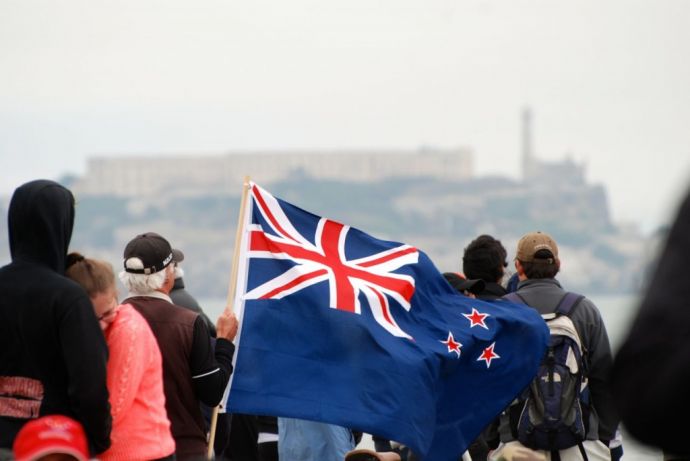 Alcatraz in the background. The Aussie white-knuckles his flag. 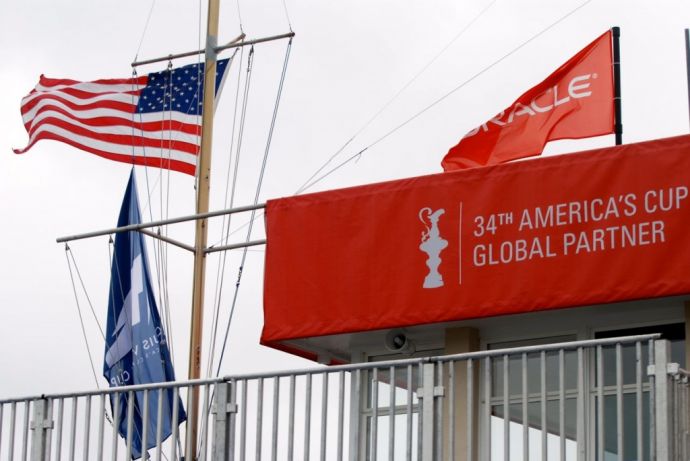 Oracle's hangout. No surprise, but they have quite the premo viewing spot. 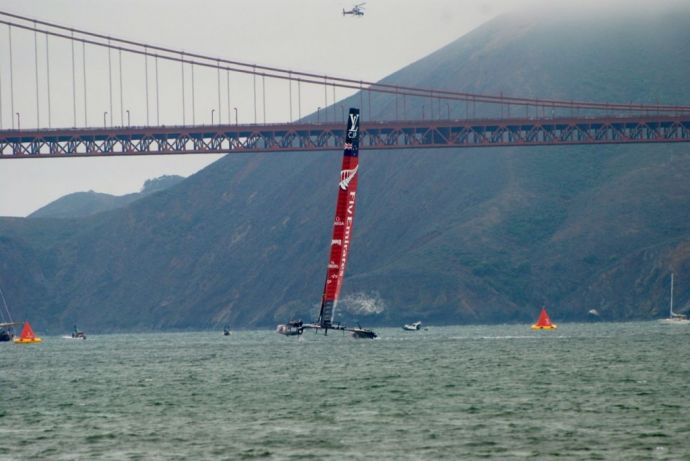 Can't wait for the rest of the races throughout the summer.  Congrats, Pete, on building one heck of a boat. Welcome to San Francisco, Kathy. So glad you're here.