S is for Scoliosis

Many of you know the drill. The one that happens in the 6th or 7th grade. The obligatory spine check. My test took place in my pediatrician's office. After a 1/2 mile worth of laps around the examining room and 20 toe touches, Dr. Zucker sat my mother and me down and said he wanted me to go to a specialist for further examination. Something didn't look right.

A week later I was in Dr. Brody's office, a highly recommended Connecticut orthopedic doctor. His drill was much like Dr. Zucker's, another handful of laps around his examining room and 10 more toe touches. But this time I graduated to the X-ray room where a technician took pictures of my spine. Back in the examination room, my Mom and I waited for what felt like an eternity, but what was probably a mere 10 minutes. Finally, a nurse, carrying the X-rays came into the room and slid one of them up on the X-ray screen. She left the light of the screen off, and left the room, leaving my Mom and me just staring at the X-ray reader and straining to interpret a barely visible X-ray.

That's when my stomach sank. Even without the light of the screen, I could still see my curved spine. I looked at my Mom for reassurance, but instead what I saw was her turning her head and trying to make sense of what she was looking at. I could tell she was trying to figure out if her position in the room was causing the X-ray to show that curve or if, it was just a curved spine that she was looking at. Dr. Brody cleared things up quickly. He entered the room, flipped on the screen light, and in one second, my Mom and I had our answer. I had scoliosis.

Very simply, scoliosis is a curvature of the spine. It affects girls more so than boys, and it tends to become more pronounced during adolescence. As a teenager grows, so could a scoliotic spine. The typical curve is from side to side and could either take shape in the form of the letter S or C. 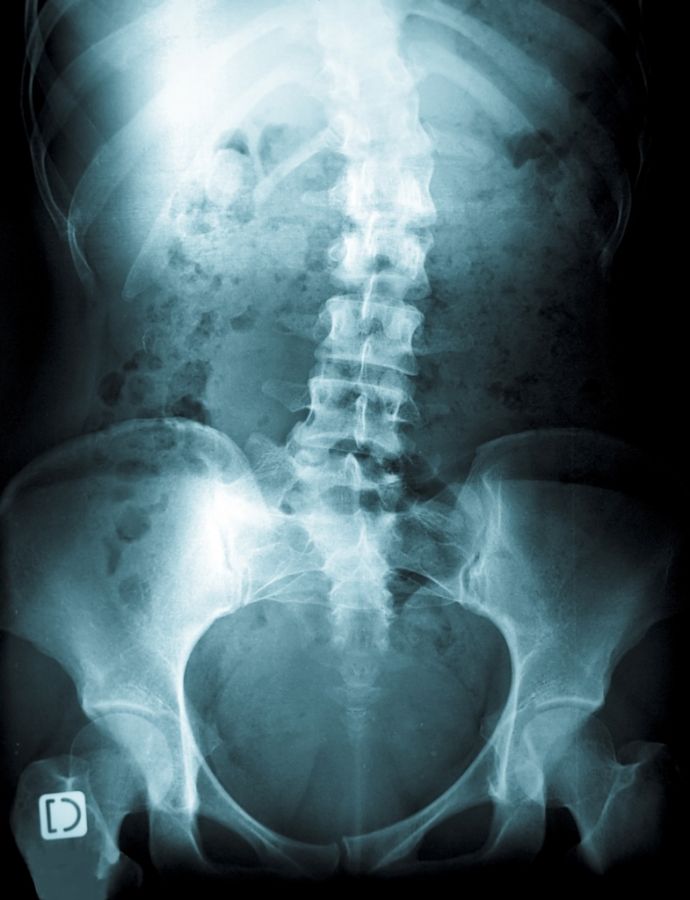 Not my spine, but an X-ray of a young girl's scoliosis

A curve could be in the top part of the back, the more common of the two locations, or in the lower back, where my curve was, less common. Scoliosis is usually classified as congenital (anomalies present at birth), idiopathic (they're not sure the cause), or neuromuscular (occurring as a result of something else having happened). Seven million fellow Americans get to claim that we're scoliosis folks.

How it's treated all depends on the severity of the curve at detection and how it advances over time. Doctors may prescribe a brace or in some cases operate. In my case my treatment included doing exercises that were designed to strengthen the muscles in my back with the goal that the muscles would ward off a worsening of the curve. Despite being extremely diligent about these exercises for well over a year and switching to sleeping on my side, rather than on my stomach that I had done since birth, my curve worsened.

If the muscles can't hold the spine, the next logical step is to put the patient in a backbrace, and the brace you get depends upon where the curve is and the severity of the curve. A severe curve may warrant the Milwaukee brace, a full-torso brace with a neck ring to rest the chin. For any of you who remember the Judy Blume book, Deenie, that's how you can picture what the Milwaukee brace looks like.

I was prescribed the Boston brace, a smaller brace that was like a corset, except more rigid and made of very thick plastic. The top of the brace starts below the breasts, stops above the pelvis, opens in back and has straps that adjust to keep you securely in place. The Boston brace is the more common of the two braces and is a lot easier to hide under clothes. I wore the brace 23 out of 24 hours a day. That's right. Every hour of the day except one for four years. I slept in it, too. I had to do exercises in the brace and out, so for that one hour out of the brace, I had to exercise, shower, and strapped it back on.

Eating was another story. I couldn't eat three meals a day; I had to eat five little ones. Overeating was literally painful, and I learned the hard way. One extra serving would translate into serious discomfort. The benefit was I was pretty skinny for a quite some time.

I would angst-up when summer came. I couldn't stand the whole beach scene. Connecticut living is beautiful, but come summer it was hot and worse, humid, and having a brace on just reinforced that. I was a self-conscious teenager before the brace thing, and adding that to the mix didn’t help matters, especially during the summer.

If this sounds like this was traumatic, it was, but only for a brief period. Like so much in life, I got used to it. After the initial shock, I just accepted it, shut up about it, and moved on. My parents were far more concerned than I was. It must have been pretty confusing for them. I think they felt like they had done something to me and felt responsible that I was in this thing for four years.

And when I finally stopped growing at 18, I unstrapped my brace for the last time and stuck it in my closet, where it remained until recently. Not much has changed since the years I wore a brace. Teenage girls and boys are treated the same way today through exercises, a brace, or surgery.

The brace was more than just a back support. It was a defining period in my life and gave me a bit of perspective on accepting the curves that life can throw you. I learned that those curves may not straighten out entirely but just enough for you to get where you need to without too much inconvenience.