My father placed a huge value on making an effort, especially when it came to conversation. “If you’re in a conversation, you need to participate,” he’d say. “You can’t just sit there like a bump on a log.” He was a gifted storyteller and loved any audience who reinforced his ability. He could hold court at a dinner party for hours without wearing anyone out. There was always plenty of laughter and people holding their sides.

Every St. Patrick’s Day my parents threw a party at our house. A good 70 plus friends came proudly wearing various shades of green, a panoply of greens. The attendee list had the obligatory Mick names: Murphys, Doyles, Cavanaughs, O’Briens. My parents didn’t discriminate, so non-Irish friends could come as well.  The DeRosas and Bozzutis even entered through the front door. Everyone was Irish on St. Patrick’s Day.

I used to feel sorry for anyone shy who’d show up to our house. Quiet people were somewhat alien to my family. They learned the hard way that a Yes rsvp doubled as a requirement to perform a talent, even if they had none. If you hated standing in front of a crowd, attending an event at our house would be your worst nightmare. My Dad would sign people up on a poster board that he hung from our staircase and he stuck to the line-up, even using a pointer to call people up and point out who was on deck. It didn’t matter what you signed up for, as long as you showed up and got up. It was your admission ticket. Let’s just say the liquor flowed.

There were a few noteworthy talents in the bunch. Father Murphy used to play the organ for the silent movies at a Boston theatre while he was growing up. It’s how he earned money to put himself through college. The guy never took a lesson in his life. He had one of those magical, musical ears. Any song, any key, he nailed it. Father Murphy was a staple at our parties and always was the piano accompaniment for any would-be singer. So though his piano playing was rock solid, the talent dipped, or rather plummeted, after his.

Singing was the talent of choice, but not the only one. My parents’ friends read poems, tap danced, and even twirled a baton, until the time Mrs. Davis threw hers in the air, and it landed squarely on Mr. Grogan’s forehead. My Dad clamped down on the baton twirling after that. Baton twirling and Jim Beam proved to be a liability.

My Dad died in September 2009.  Hundreds attended his funeral. He was of the age where a lot of his peers had either passed or had significant health woes, so for those who schlepped to Connecticut to honor his passing, it was a big deal. But then again, my Dad was a big deal. Those who came, including my friends and my siblings’ friends, did for him what he’d do in a nanosecond, they showed up, they participated in celebrating his life. “The show up,” as he called it, was the ultimate sign of effort.

This is my first post. I know you have a lot of choices of sites to visit, so I really appreciate you visiting mine. You’ve done for me what my Dad’s friends did for him, you’ve showed up.  So thank you. And to my Pop, thanks for the inspiration. 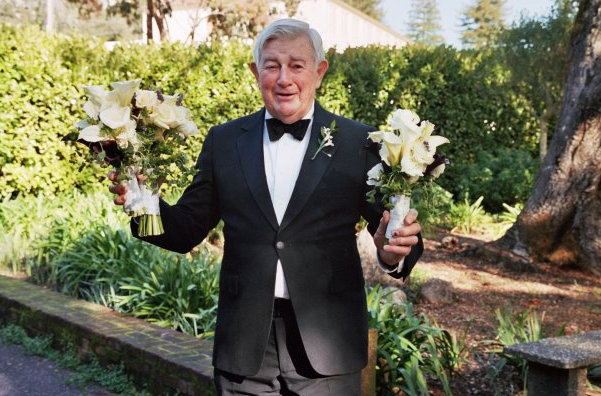