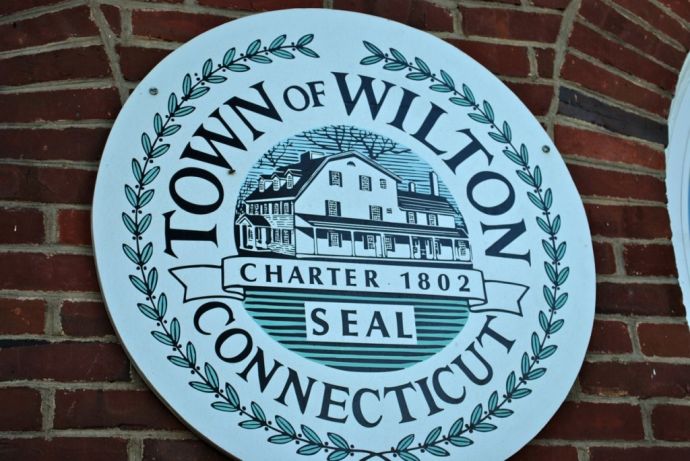 I grew up here in Wilton, Connecticut, a small town in Fairfield County, Connecticut. Population 17,600. It's a lovely, quaint New England town. It was and still is a bedroom community for those who work in Manhattan. That's how my family landed here in the '60s. My Dad took a job in New York, so my parents needed to find a town with good public school and close-ish to New York. Wilton it was. 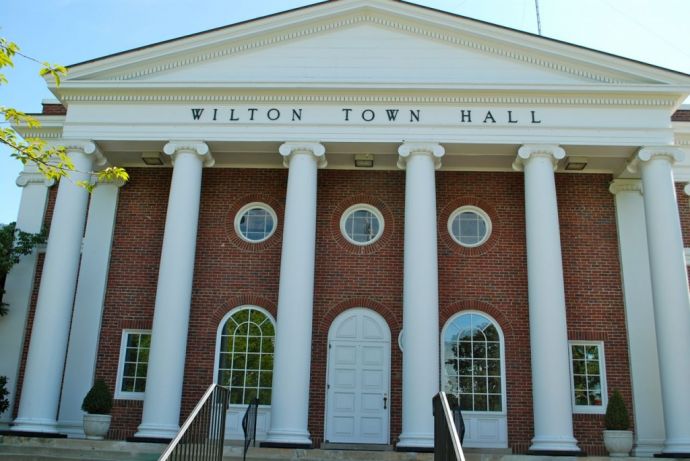 The Town Hall is quite a building. When I was six years old I told my Mom that I wanted a house just like the Town Hall. She almost drove off the road. I guess she was expecting me to say, a white house or something a little more simplistic than a grand building with columns that was a landmark in town. 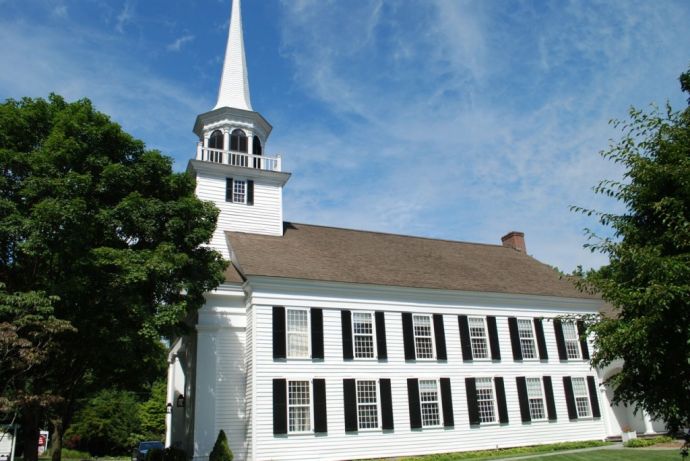 Like a lot of New England towns, Wilton has its share of churches, many that epitomize the quintessential New England architecture, complete with clapboard siding and black shutters. Very striking. This is the Congregational Church, located on Ridgefield Road, the road that connects Wilton to, well, Ridgefield. It was built in 1790. 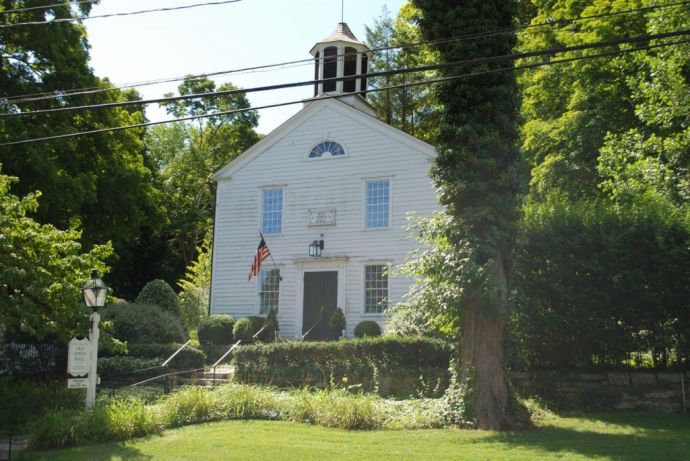 Across from the Congregational Church is Wilton's Old Town Hall. It was the Town Hall from 1832. It served two purposes. The ground floor was a meeting place for the town officials and residents to discuss town-related stuff, while upstairs offered private schooling to prep Wilton students for college. Now the Wilton Garden Club maintains it and it's used for parties, even weddings. Sweet, isn't? In 1931 the Town Hall (pictured at the top) became the new Town Hall. 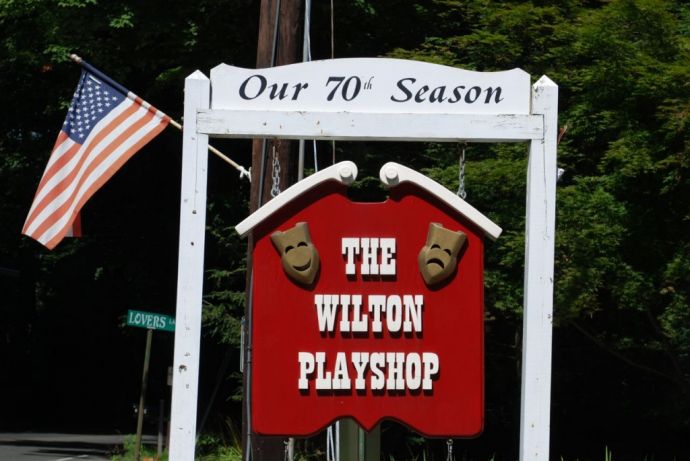 Until recently, Wilton was a dry town. What's that? It means the town couldn't sell alcohol. There could be no bars, no booze sold in restaurants, no liquor stores. Period. So we had very few restaurants. In fact, we had two diners, and that was about it. Now, it's moist, meaning that restaurants can sell alcohol, but there still can be no bars and no liquor stores. The horror. So when it came down to stuff to do there, well, it was limited. There is, however, a strong arts culture in Wilton, including a devoted theater company and theater-going following. We have the Wilton Playshop located on Lovers Lane (you can see the sign peaking through in the background). They put on a fair amount of plays during the year. It's a treat to go. 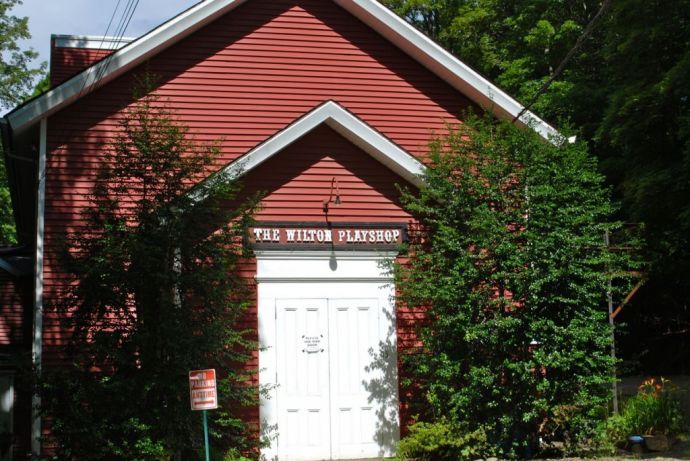 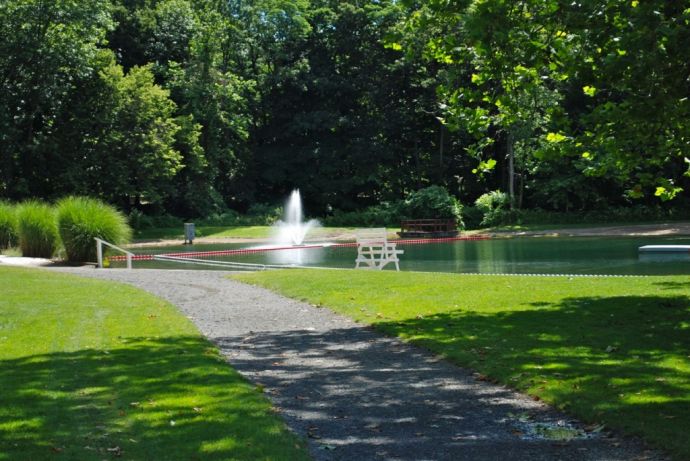 At the bottom of Lover's Lane is Merwin Meadows, the town's public watering hole. I logged a lot of hours here, especially across the pond in the shade (Irish skin). It was here in high school that I got in a boatload of trouble one night when a good ten of us decided to take a night time swim, naked. Let's just say the Wilton police didn't appreciate our nocturnal urge to do laps. Perhaps it's because we parked behind the town's bank, thinking the cars would never be spotted. If you're a cop in Wilton and there's not a whole lot to patrol, the one thing you probably can't fall down on is to check on the local bank. And so they did. Spotting the two cars parked behind the bank triggered the Wilton police's version of Code Red raid. 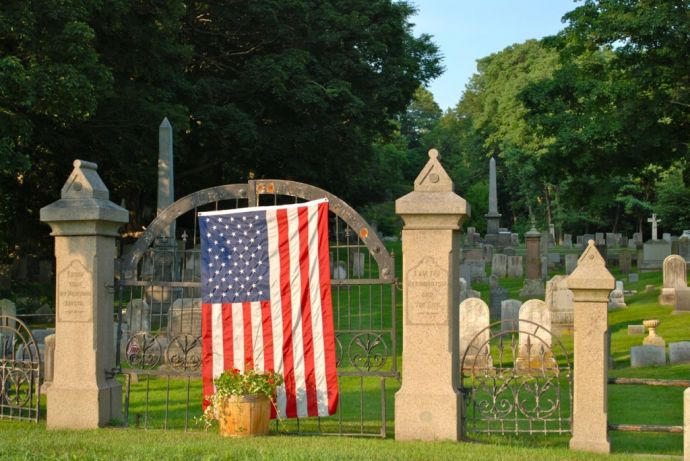 This is Wilton's Hillside Cemetery used from 1734-1924. It's located right on Wilton's Route 7, the main thorougfare for our town. 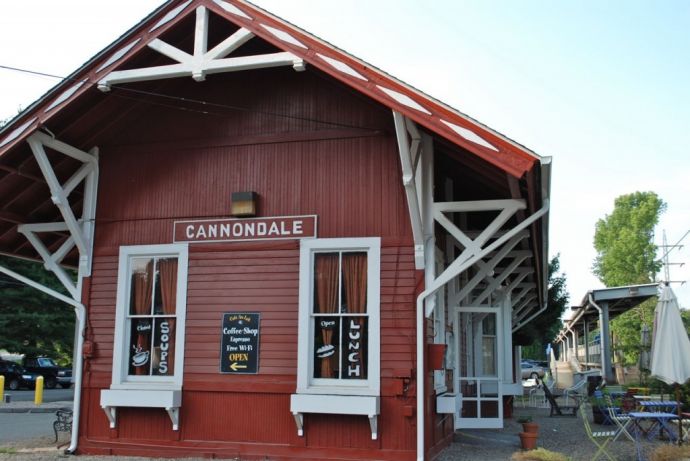 If you're a biker, you'll recognize this name and perhaps this building. And if you're old enough, you may even have Cannondale gear that has a graphic of this train station on it (I still have the old stuff). This is Cannondale, a section of Wilton that offers a train stop, but more noteworthy, where Cannondale bikes started. Joe Montgomery, Jim Catrambone and Ron Davis started it in 1971. The history goes that the payphone here was used by the owners to take orders, and in the early days, when the company was nameless, one of them was asked what name should go on the invoice. He looked up at the train station and thought Cannondale seemed as good of a name as any. And so it was.

See that platform? That was never there when I was growing up. If you wanted to board the train, you did it the old fashioned way. You stepped up from the ground and then took the one-car train to South Norwalk, got off and switched trains to go into Manhattan. 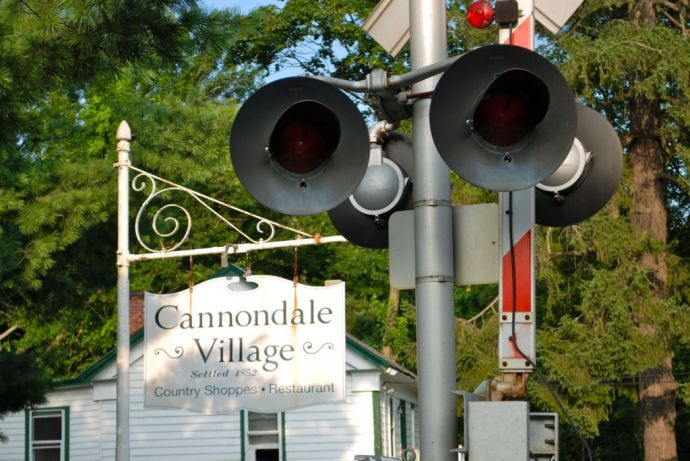 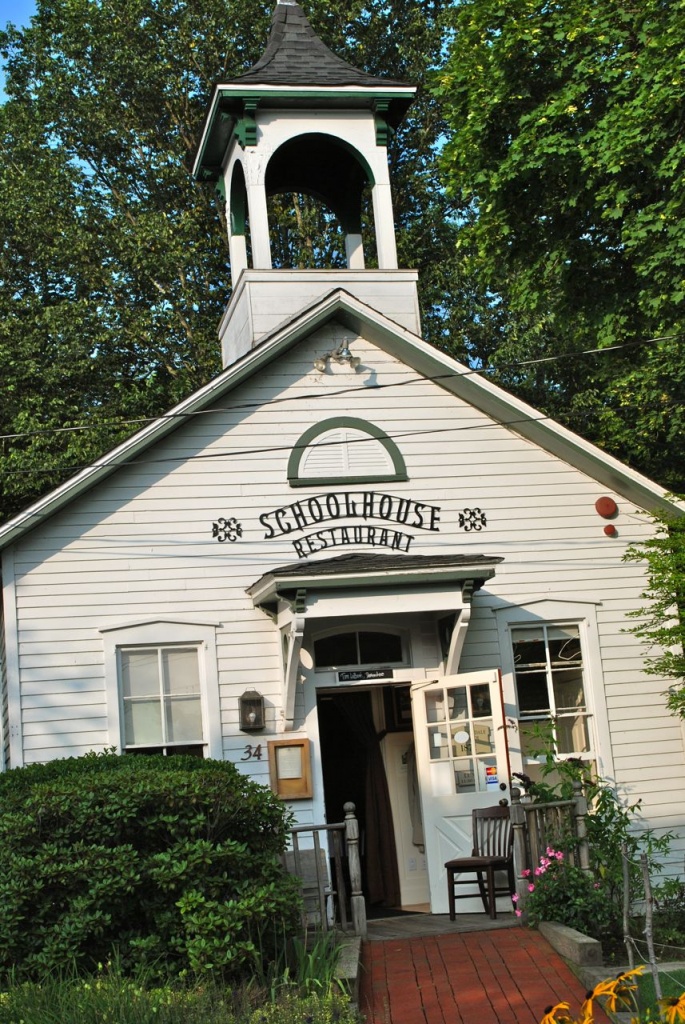 Across the street from the train station is the Old Schoolhouse Restaurant, a wonderful dining experience where the food and service are first rate. 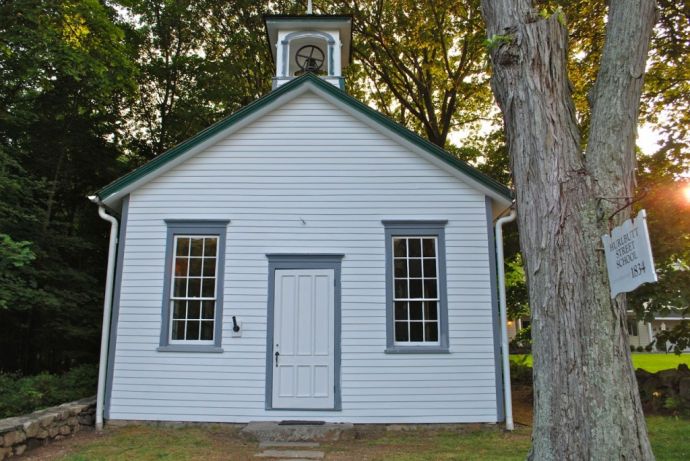 This is another old schoolhouse, the Hurlbutt Street School. It started in 1834. I'm guessing you can figure out where it's located. 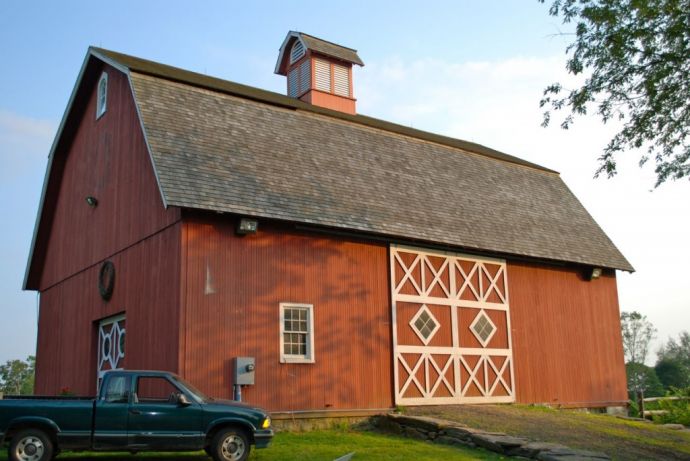 I love barns and Wilton has them, especially red ones. This one is part of Ambler Farm. The farm was there when I was growing up, but it's now owned by the town, thanks to the generous donation of the Ambler family. They have a small weekend farmers market there and an annual fall event that's fun for families. 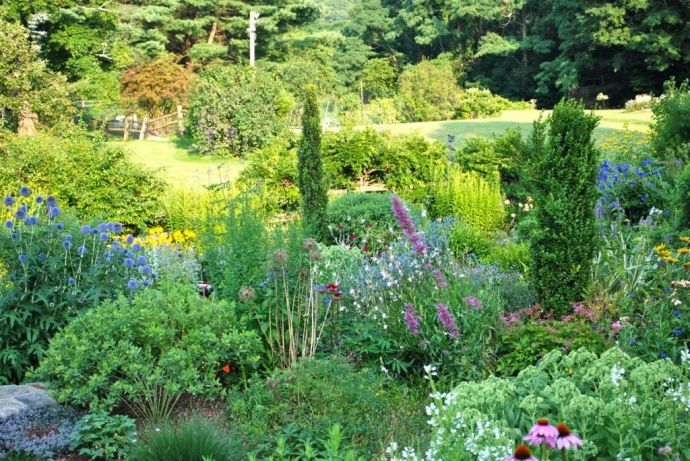 There are a lot of beautiful homes here and along with them, beautiful gardens, like this one on Nod Hill Road. 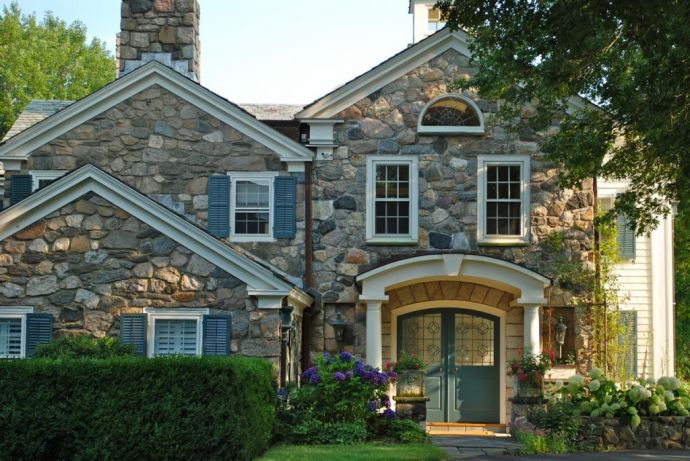 Wilton has a variety of architecture. Some homes are stone. 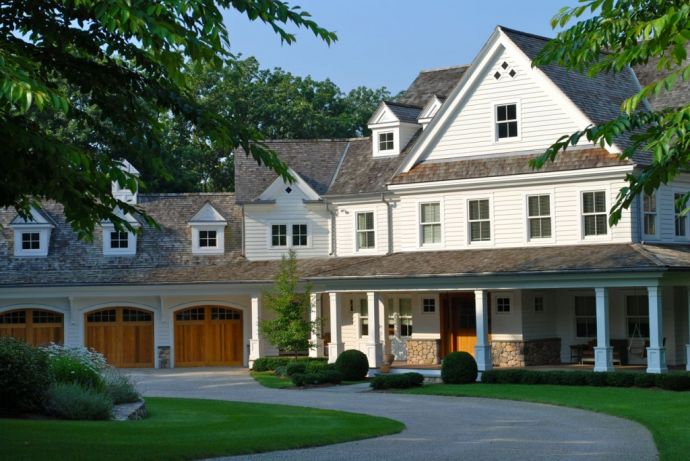 Some homes are newly built with three car garages. 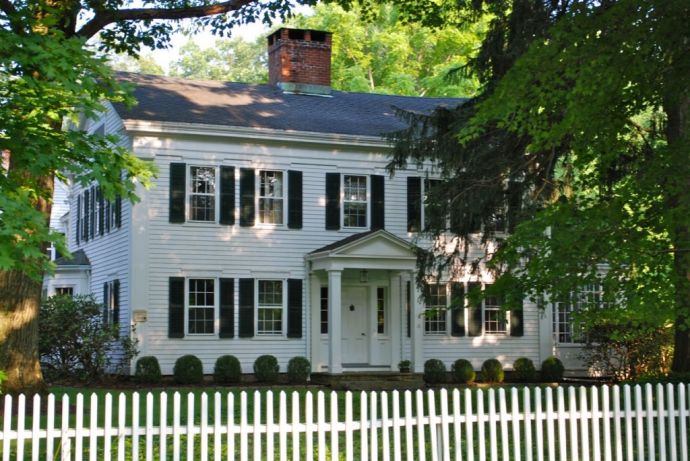 And some date back a long way. This one is by my house. I can't get enough of white picket fences. You don't see them much in the Bay Area. They're so very New England. 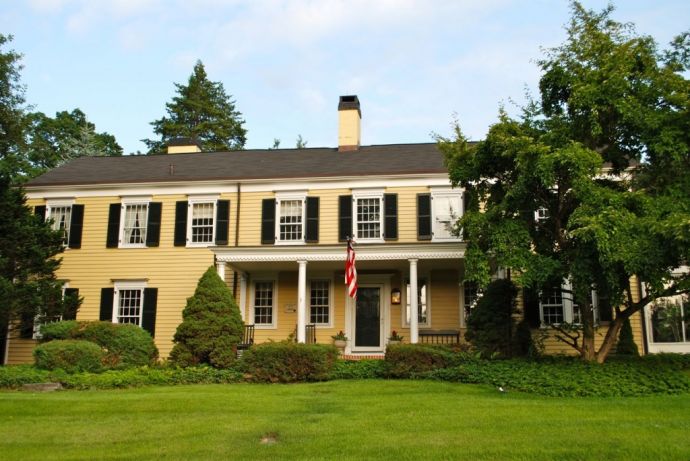 This is another of my favorite houses. This time a yellow clapboard house with black shutters.

I got a chance to spend a fair amount of time here two years ago before my Dad passed. It was a bittersweet time. He was sick for awhile so that meant many trips back here to help out. During that summer I re-explored every neighborhood in Wilton, driving on streets that weren't there when I was growing up.

A lot has changed since then. New houses. Bigger houses. Alcohol-serving restaurants. But some things are exactly the same, like deer still rushing in front of your car when you're driving on dark streets. It still has the same quaintness that I loved then and love now. My Mom always referred to it as Wonderful Wilton. I used to roll my eyes at that and now, I say it.